By Aquinas wired,
Thursday at 9:17 am 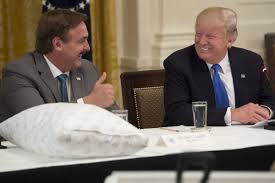 WASHINGTON—One of the largest makers of voting machines in the U.S. on Monday sued a prominent supporter of former President Donald Trump, alleging that the businessman had defamed the company with false accusations that it had rigged the 2020 election for President Biden.Dominion Voting Systems sued Mike Lindell, chief executive of Minnesota-based MyPillow Inc., and his company in the U.S. District Court for the District of Columbia, seeking more than $1.3 billion in damages.”   Wall Street Journal

Once had pillows to sell

Now he wants us to buy

Filed under:
The MyPillow Guy