The collective world spent the majority of the past QuaranYear binge watching The Office. It’s likely you binged, moved onto binging something else and then when you inevitably couldn’t find something else new, you went back to binging The Office. Don’t worry, we all did it. And Replay Lincoln Park knows this. Thus, enter the return of ‘Back to the Office’. For all the watching of Michael Scott and company you’ve done since March 2020, you can now experience it in real life again at The Office pop-up at Replay Lincoln Park.

The pop-up went live on April 9th and will remain open through May 16th.

Everyone knows that Replay Lincoln Park is Chicago’s oasis for your favorite TV shows and movies come to life. The arcade bar at 2833 N Sheffield has become home to everything from the Moe’s Tavern Simpsons pop-up, the Central Perk Coffee Shop rendition of FRIENDS, and most recently, Schitt’s Creek’s Schitt Happens. They have a ton in store for pop-up feigns this time around as they’re transforming the space fully into a myriad of locations featured in the show. If a recreation of the iconic Duner Mifflin office is what you’re into, they’ll have that. Want to head to Chili’s and get as drunk as Pam at the Dundies, you can do that. Additionally, homages to Schrute Farms, Michael Scott Paper Company, and the Warehouse will be featured. 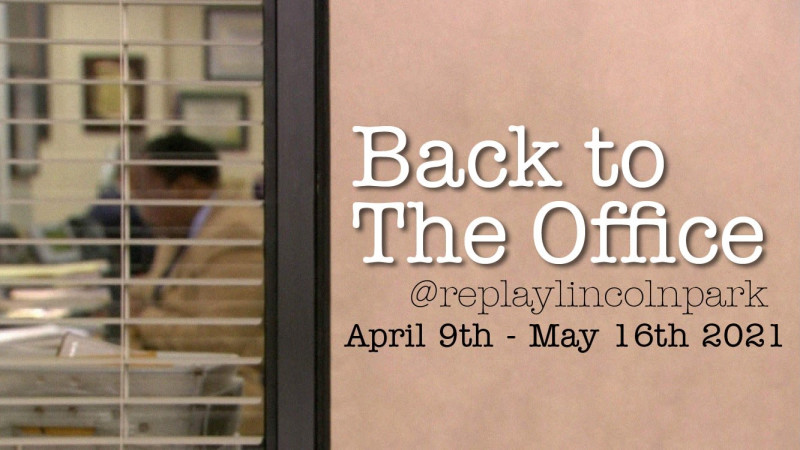 The menu is also catered to the theme including a vodka drink infused with beet syrup that would drive Dwight wild, soft pretzels that would make even Stanley crack a smile, and the infamous scotch and Splenda should that be your cup of tea.

Tickets are $20 a piece but they come with two complimentary drink tickets and a table reservation for an hour. In addition, you do get access to all of Replay’s 30+ arcade games so right after you’re done immersing yourself with the Assistant (to the) Regional Manger you can yam on some people in NBA Jam as if you were Jim vs. Roy in the Warehouse. It’s a true taste of all worlds.

For more information on the ‘Back to the Office’ pop-up, visit Replay Lincoln Park’s website, or, follow Replay on Instagram at @replaylincolnpark. Replay Lincoln Park is located at 2833 N Sheffield Ave, Chicago, IL 60657 at the corner of Sheffield and Wolfram, just off the Diversey Brown Line stop.

The post ‘Back to the Office’ Pop-Up Returns at Replay Lincoln Park appeared first on UrbanMatter.