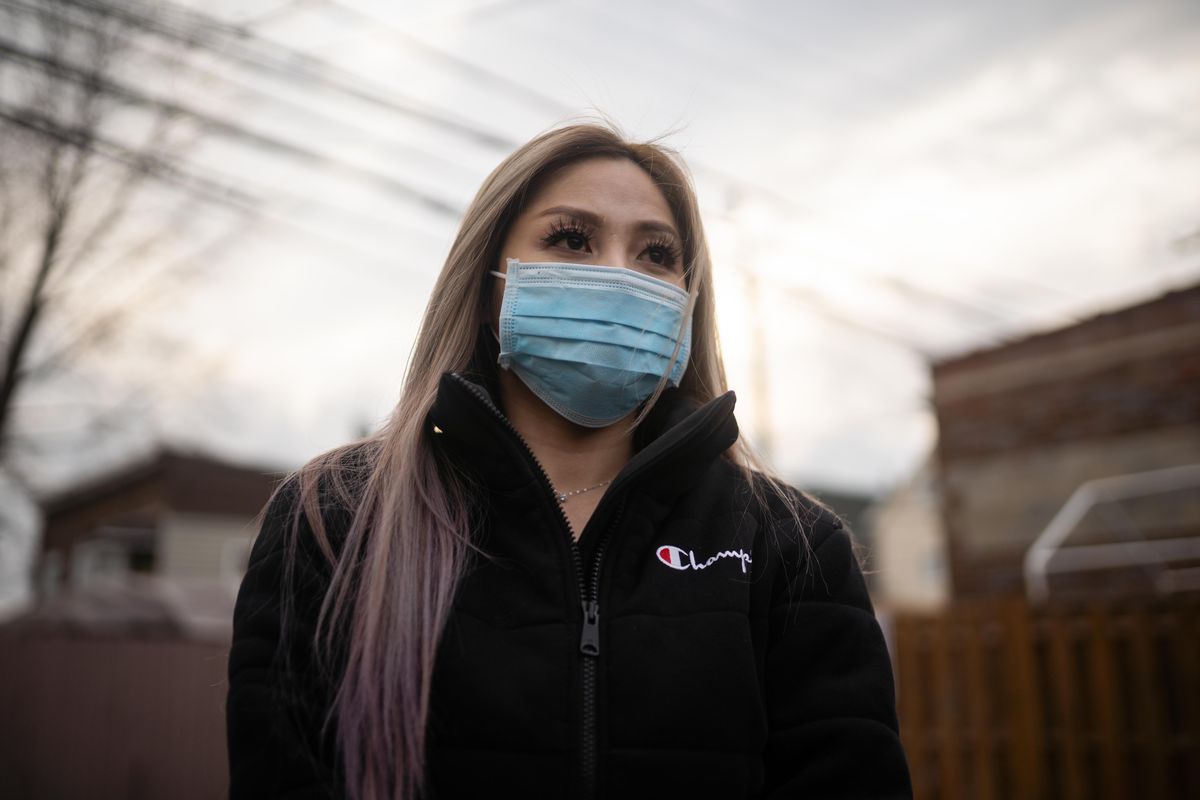 Kaylee Cong, 32, whose Vietnamese father was attacked, poses for a portrait outside a nail spa she manages in the Logan Square neighborhood, Saturday afternoon, March 27, 2021.
Pat Nabong/Sun-Times

Illinois public health officials on Friday reported a second straight record-setting day for COVID-19 vaccinations — but the state also hit a worrying milestone by logging more than 4,000 new cases of the disease for the first time in 10 weeks as the latest coronavirus surge builds momentum.

With 164,462 doses administered Thursday, Illinois is vaccinating more people than ever, at an average clip of 118,336 shots per day over the last week, according to the Illinois Department of Public Health.

That still hasn’t been enough to tamp down a sharp rise in infections over the past month, as most key metrics have almost doubled.

With another 4,004 residents testing positive for the virus — the most in a day since Jan. 29 — about 3,122 Illinoisans have contracted COVID-19 each day over the past week. That rate is up 91% compared to the first week of March, when the state was reporting an average of 1,663 daily cases.

1:30 p.m. No region in the world spared as coronavirus cases, deaths surge

WARSAW, Poland — Hospitals in Turkey and Poland are filling up. Pakistan is restricting domestic travel. The U.S. government will send more help to the state with the country’s worst infection increase.

The worldwide surge in coronavirus cases and deaths includes even Thailand, which has weathered the pandemic far better than many nations but now struggles to contain COVID-19.

The only exceptions to the deteriorating situation are countries that have advanced vaccination programs, mostly notably Israel and Britain. The U.S., which is a vaccination leader globally, is also seeing a small uptick in new cases, and the White House announced Friday that it would send federal assistance to Michigan to control the state’s worst-in-the-nation transmission rate.

The World Health Organization said infection rates are climbing in every global region, driven by new virus variants and too many countries coming out of lockdown too soon.

Vendors on the Chicago Riverwalk began a phased-in reopening Friday that will have all vendors open by the end of May.

Island Party Hut, Beat Kitchen on the River and City Winery opened Friday. A new vendor addition this year is Pier 31, which plans to open in May.

“The Riverwalk is not only an important part of our city’s economic engine, but it also adds to the liveliness of our iconic summers,” Mayor Lori Lightfoot said in a news release.

“This reopening serves as yet another indicator of our city’s resilience in the face of the COVID-19 pandemic, and we look forward to making this Chicago staple available to residents and visitors this spring and summer.”

With 500 permits issued every year, it’s safe to say that Chicago loves a parade.

On Thursday, the City Council’s Committee on Cultural Affairs and Special Events proved that love by providing a bit of post-pandemic protection.

At Mayor Lori Lightfoot’s behest, aldermen endorsed an ordinance that preserves permit priority for “traditional parades” scheduled at around the same time along the same route “in connection with a specific holiday or consistent theme for at least the prior five years.”

That priority status would remain even though those “traditional parades” were canceled last year because of the coronavirus — and even though none have been held so far this year, either.

Deputy Transportation Commissioner Mike Simon said the goal of the mayor’s ordinance is to prevent the temporary hiatus from opening the door to post-pandemic feuds between parade organizers vying for permits on the same day.

The coronavirus pandemic sparked a mental health crisis. For Asians and Asian Americans also facing a rise in hate incidents across the country, it’s been “trauma upon trauma,” says Anne Saw, a Chicago psychologist.

“A lot of our communities are experiencing so many pandemic stressors that are then compounded by a lot of anti-Asian discrimination that we’re also experiencing,” says Saw, who teaches at DePaul University and directs the Chicago Asian American Psychology Lab.

“It’s tough to, like, get your head above water and get some room to breathe when every day we’re confronted with new traumas,” she says.

We talked to seven Chicagoans about how anti-Asian violence coupled with the pandemic have affected their mental health and their everyday lives. Among them was Kaylee Cong, 32, of Uptown, who manages a nail spa.

On March 20, four days after the Atlanta shootings, Cong says, her 60-year-old Vietnamese father was punched in the head as he walked alone that night near Broadway and West Ainslee Street. He turned to run, saw a white man holding a baseball bat watching him and called 911.

“We’re really scared,” says Cong, who’d been talking with her father about the Georgia shootings the day before he was attacked. “What if the person come back and do revenge? My entire life living here, it was so peaceful. There was no violence like this.”

She says her father hasn’t wanted to leave the house since that happened.

Older Asian Americans “just want to keep quiet and don’t want to make waves,” Cong says. “I have really different mentality. We deserve to, you know, feel safe. And we shouldn’t be afraid to stand up for ourselves.”

Read the stories of six more Chicagoans we spoke to here.

A final high school reopening agreement remains elusive between Chicago Public Schools and the Chicago Teachers Union just days before high school teachers are due to return to classrooms — and the union president said Thursday the next few days of negotiations will determine whether workers show up on Monday.

Though the range of issues is smaller and disagreement over those items is not as severe as the hostile K-8 negotiations in February, there are still a few unresolved concerns the union is expressing as COVID-19 infections once again rise in the city.

CPS officials have directed 5,350 high school teachers to return to buildings Monday with or without a CTU agreement, and about 26,000 students in grades 9-12 are expected back the following week.

Whether or not that timeline sticks is dependent on “how outrageous the board’s positions are as we go ahead,” CTU President Jesse Sharkey told a few hundred members at a virtual meeting Thursday that was closed to the public.

University of Chicago announced a stay-at-home period for students Wednesday evening following the largest COVID-19 outbreak at the university since the start of the academic year.

After more than 50 cases of the coronavirus were detected among undergraduates in recent days, the university announced that students living on-campus must observe a week-long stay-at-home period immediately.

“We expect this number to increase,” university officials said in an email sent to members of the university community Thursday.

All undergraduate classes will be fully remote for at least a week starting Thursday and students can only leave their residence halls for food, medical appointments and short walks for exercise.