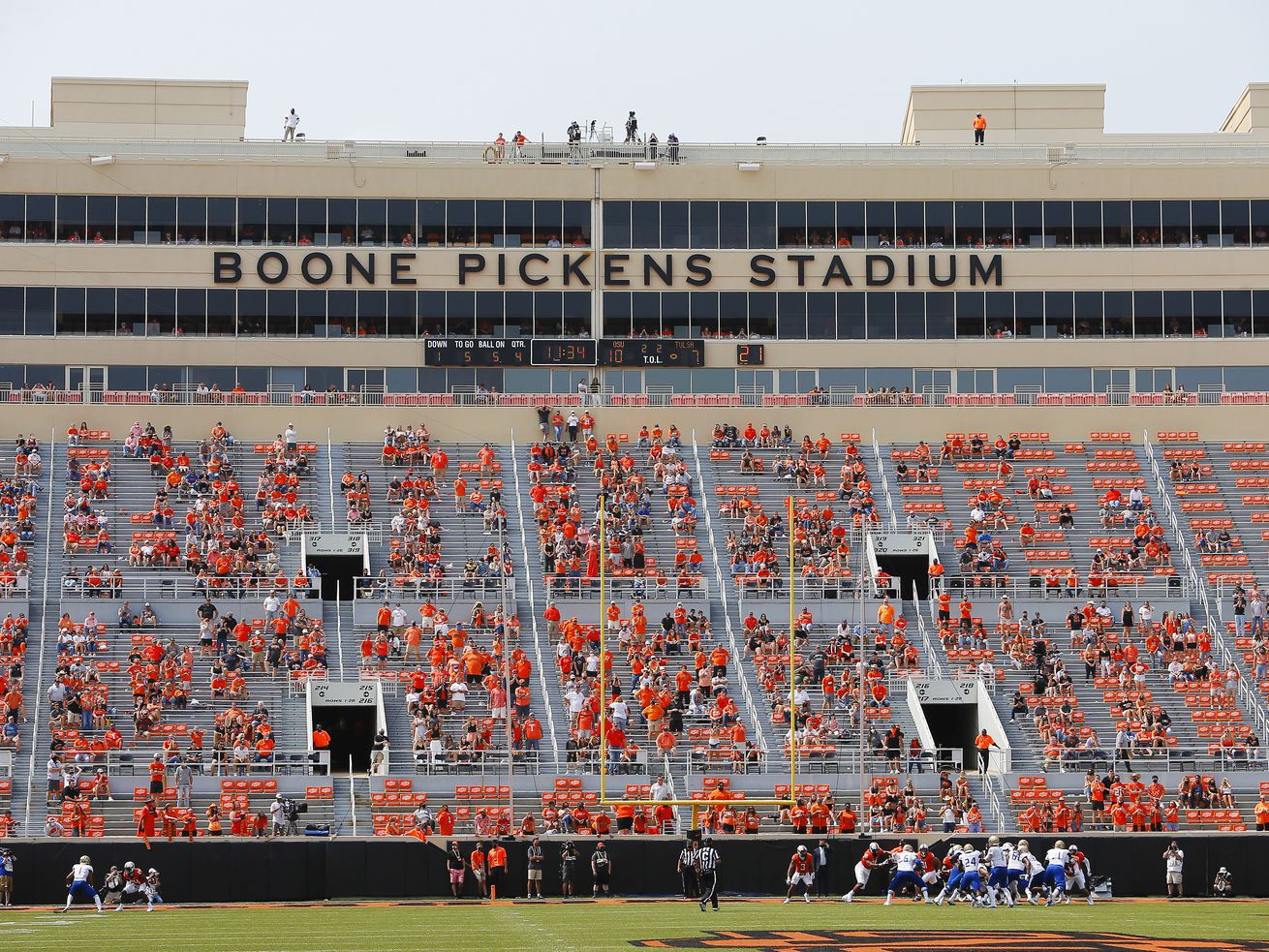 Tulsa runs a play against Oklahoma State with fans spread out due to COVID-19 precautions on Sept. 19 in Stillwater, Okla. | Photo by Brian Bahr/Getty Images

We’re heading into a very dark time, a time that experts warned months ago was coming.

Sports, or at least the idea of sports, are good for a nation’s soul during a pandemic. They bring us together. They divert our attention. They make us hopeful, unless the franchise one follows hasn’t gotten the quarterback position right in what feels like centuries.

You know what’s better for a nation’s soul? Watching COVID-19 cases and deaths drop. Knowing that someday, you’ll be able to hug your grandchild, no matter how difficult it might be to be deprived of that joy right now. Staying alive.

The Ivy League understands this. On Thursday, it canceled winter sports. It already had canceled fall sports, including football, and was the first conference to cancel its men’s and women’s basketball tournaments in March, when the pandemic was in its infancy. The health of its athletes, coaches, students, students’ relatives and faculty appears to be paramount.

Coronavirus cases are skyrocketing across the country, and experts have warned that we are in for a painful winter. Thanksgiving is looming. Until this year, has anyone ever described Thanksgiving as looming, as if it were a hooded specter? That alone should tell us we need to reassess everything, including sports. We shouldn’t be getting together in groups in confined spaces for the holidays.

Maybe we shouldn’t be huddling on football fields, either.

College football is a mess, with 57 FBS games having been canceled or postponed so far because of the virus. A limited number of fans are still allowed in many stadiums, which seems risky, but not to Florida coach Dan Mullen. He pushed for 90,000 people filling the Gators’ stadium last month for a game against LSU. The game was postponed because of a COVID-19 breakout on Florida’s team. Mullen contracted the virus, because that’s how the universe works.

You can’t go a day without an NFL team announcing positive tests for some of its players or staff. This is a league with some of the best testing and the best information available. If you think it’s hard to block a 300-pound defensive tackle, try blocking COVID-19. It figures to get much worse.

This is all about TV money, of course. It’s why sports leagues have tried, with varying amounts of success, to carry on amid a nasty, highly contagious virus. In one hand was health and in the other was additional wealth, billions of dollars of it. You didn’t have to be an economist to understand which was which. If you were an ethicist, you were encouraged to take a hike. Even though Ivy League presidents did the responsible thing by canceling football and basketball, they didn’t have truckloads of TV money influencing their noble thoughts.

It felt like a decision had been made to enjoy now, pay later. And here we are, paying with a ridiculously high interest rate.

Mayor Lori Lightfoot has ordered a 30-day stay-at-home advisory, starting Monday. It’s in anticipation of Thanksgiving and the tradition of gathering in large groups to celebrate the holiday. Wisconsin’s governor is also urging the public to stay home because the state’s hospitals are running out of beds, thanks to the virus.

Will people listen? Some will, some won’t. But the advisories are the right move. The right move for college and pro football would be a similar pause during and after the holidays.

If I know one thing in life right now, it’s that a pause will never happen. Money talks.

This has not been our finest hour as a country. Too many people still refuse to wear masks, claiming it’s a matter of personal freedom. It’s a far cry from World War II, when Americans dropped everything to fight a common enemy. If a similar global crisis arose today, I can only assume that there would be plenty of patriots who would refuse to wear a military uniform. The shirts are too constricting, they’d say. A violation of their rights, they’d cry.

We’re at war with a terrible virus. It’s hard to understand why we’re still asking whether playing games during a pandemic is a good idea. The soaring number of COVID-19 cases would seem to argue convincingly that games are not a good idea at all.

Yet here we are. It doesn’t make much sense, like a lot of behavior during the pandemic.