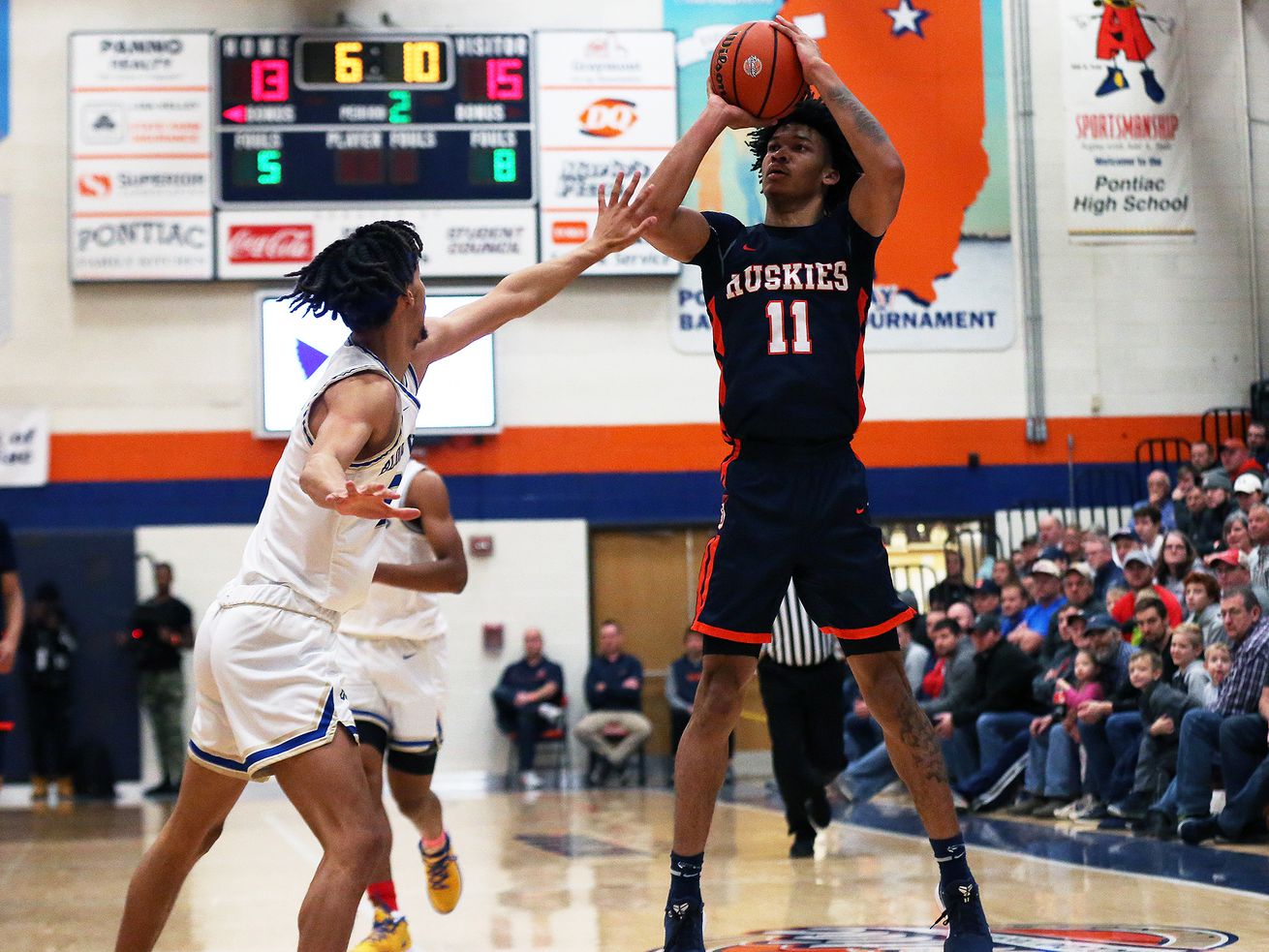 Isaiah Barnes (11), playing for Oak Park last season, shoots a three against Bloom. He is expected to sign with Michigan later this week. | Allen Cunningham/For the Sun-Times

It didn’t take long for Michigan coach Juwan Howard, a Vocational grad, to make an impact in recruiting. He’s set to land the best class in Ann Arbor since the Fab Five. The Wolverines have landed six recruits, including 6-8 forward Caleb Houston, a five-star recruit out of Montverde Academy in Florida. Local product Isaiah Barnes of Simeon joins top 30 recruit Moussa Diabate, a 6-9 big who committed on Monday.

Here’s a look at the rest of the Top Ten:

2. Florida State: Impressive the Seminoles are this high even after losing top 25 talent Bryce McGowens, who de-ccommitted a month ago. However, a pair of other top 25 players in the country, combo guard Jalen Warley and 6-7 Matthew Cleveland, highlight a four-man class that also includes two 7-footers: 7-3 Naheem McLeod and 7-1 John Butler.

3. Kentucky: Fenwick star Bryce Hopkins is part of a trio of recruits who are all among the top 50 players in the country. The headliner is Atlanta product Daimion Collins, a five-star 6-9 forward, while Nolan Hickman is an athletic facilitator out of Utah.

4. Villanova: Jay Wright hit it big locally by landing three four-star recruits all within one hour of campus –– guard Jordan Longino (Germanton, Pa.), 6-8 Trey Patterson (Somerset, N.J.) and 6-9 Nnanna Njoku (Hockessin, Del.). All three are ranked among the 100 players in the country.

5. Baylor: The Bears have the best class in the Big 12. Do-it-all 6-7 Kendall Brown is a top 15 player in the country, while shooting guard Langston Love is a top 60 player and 6-8 Jeremy Sochan is a heralded player from Germany.

6. Duke: The only program thus far to secure two five-star talents –– 6-9 Paolo Banchero and 6-6 AJ Griffin –– who are both ranked among the top 10 players in the country. Can the Blue Devils land a third one in the nation’s top-ranked prospect, 6-9 Patrick Baldwin, Jr., out of Milwaukee?

7. Michigan State: Max Christie, a 6-6 guard at Rolling Meadows, is among the nation’s very best and the biggest name. Joining him will be a pair of four-star Michigan prep products: guard Jaden Akins out of Ypsilanti and Detroit’s 6-6 Pierre Brooks.

10. Alabama: The state’s biggest star, 6-3 point guard JD Davison from Letohatchee, is staying home. Davison is considered by some to be a top 10 player in the country. The class also features Langston Williams, a 6-9 junior college star, and 6-5 wing Justin Holt.