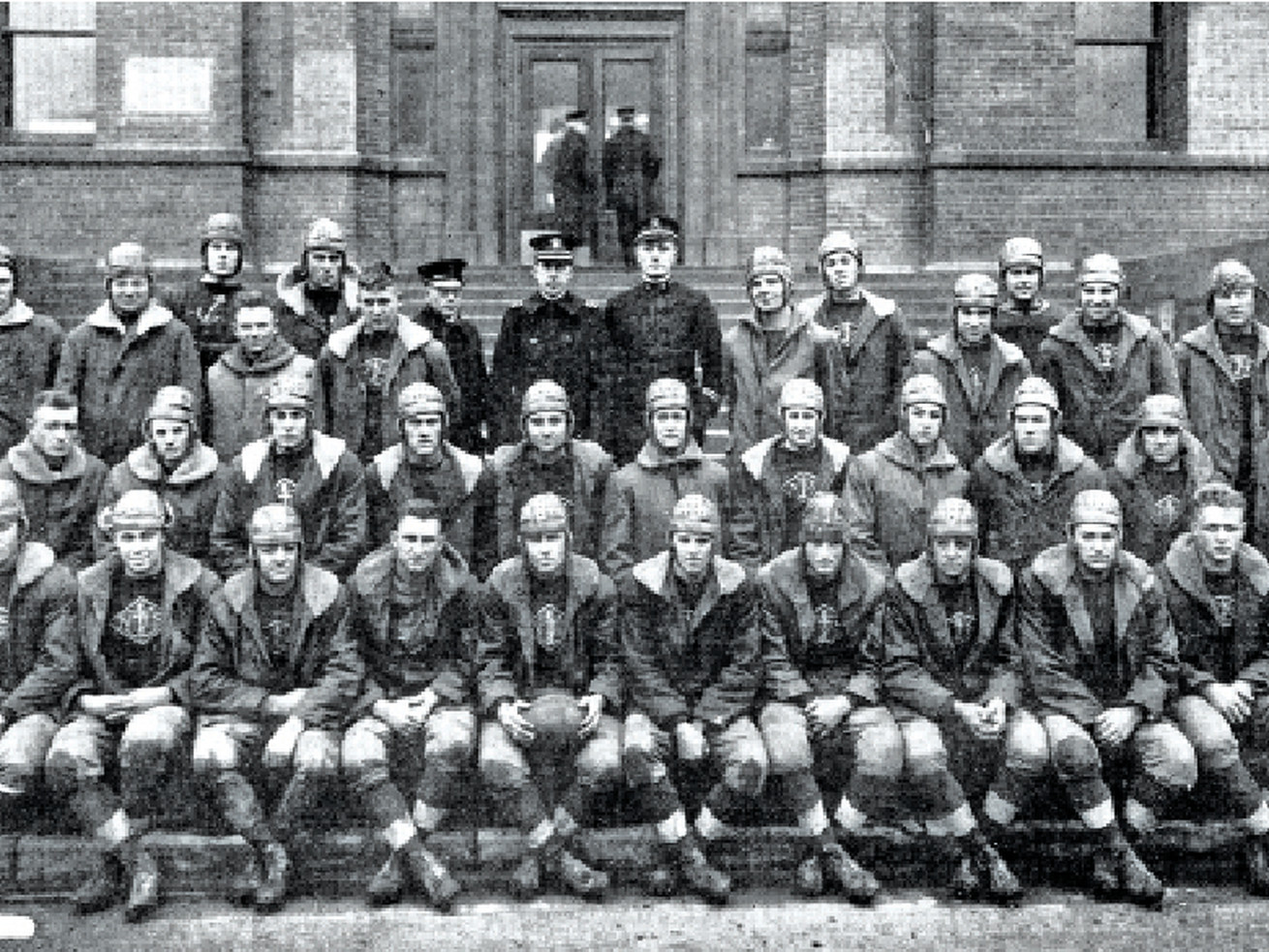 On Nov. 23, 1918, in Annapolis, Maryland, former Illinois schoolboy star Harry “Dizzy” Eielson grabbed the loose football near the Navy end zone and took off rambling for the other end zone.

Great Lakes trailed the Midshipmen 6-0, so this late stunner would tie it. As Eielson reached midfield, however, Navy coach “Gloomy” Gil Dobie barked, “Get him! Go get him!”

An obedient Bill Saunders bolted from the Navy sideline and tackled Eielson at the 25. In the ensuing mayhem, Bluejackets halfback George Halas took a swing at Saunders and an admiral brandished a sword to try to restore order.

The most peculiar college football season — in the words of Walter Camp, considered to be the father of American football — included one of the zaniest scenes in its history, in a game in which the winner would play on New Year’s Day in Pasadena, California.

Fun was a vague concept in 1918, as it is in 2020. In April 1917, the United States had entered the Great War in Europe, triggering a push to end the conflict. Spanish flu then spread across the world.

To boost morale, the Pasadena Tournament of Roses Association arranged to have its East-West football game, the precursor to the Rose Bowl, pit the nation’s two best military squads from opposite halves of the country against each other.

When four players at Michigan Agricultural College — now Michigan State — contracted the virus, the Aggies canceled their game against Northwestern less than 48 hours before kickoff. Great Lakes filled in and played host, but sloppy conditions resulted in a scoreless tie.

In 2020, such late maneuvering is frowned upon. Chattanooga agreed to fill in for Wisconsin and play at Nebraska last Saturday, but the Big Ten nixed the plan 48 hours before kickoff.

The Bluejackets also tied Notre Dame 7-7 when first-year Irish coach Knute Rockne had freshmen George Gipp and Curly Lambeau on his roster, and the Lambeau-Halas rivalry would last their lifetimes.

In 1917, he enrolled at Northwestern and captained the freshman football team. When he answered his country’s call and enlisted in the U.S. Navy, he was assigned to Great Lakes.

Navy fullback Bill Ingram had lost that ball deep in Bluejackets territory, the catalyst to the ensuing craziness. Capt. Edward W. Eberle, the Naval Academy superintendent who would rise to chief of naval operations, had been a stickler for decorum and fairness, reported authors Herb Michelson and Dave Newhouse.

They quoted Eberle, who gathered confused officials, as saying: ‘‘I said it was a touchdown. I run this place, and a touchdown it is.” Hugh Blacklock booted the extra point for the 7-6 victory.

That was the first season of Great Lakes football. The Bluejackets would field a team in the next war starting in 1942 and would play for four seasons. They lost to Notre Dame only once in five meetings, and they beat the then-No. 1 Irish 19-14 in 1943 in Chicago.

Upon the 25th anniversary of the Annapolis shenanigans, Eielson gave the Illinois State Journal his “oh, boy” line. He said he saw Saunders but didn’t alter his route because legitimate Navy players might have tackled him.

After being taken down by Saunders, Eielson stood beside Blacklock and “calmly walked out of the crowd and went off down the field and over the Annapolis goal for the touchdown that was allowed to tie the game.”

Eielson returned to Springfield to work in the family lumber business. He was elected to various offices, including mayor (1947-51). In 1950, he returned to Pasadena to portray Abraham Lincoln in the Tournament of Roses parade float.

He died in 1983 at age 86. His son, Harry Jr., had said his father believed his most glorious sporting endeavor was playing in Pasadena that New Year’s Day.