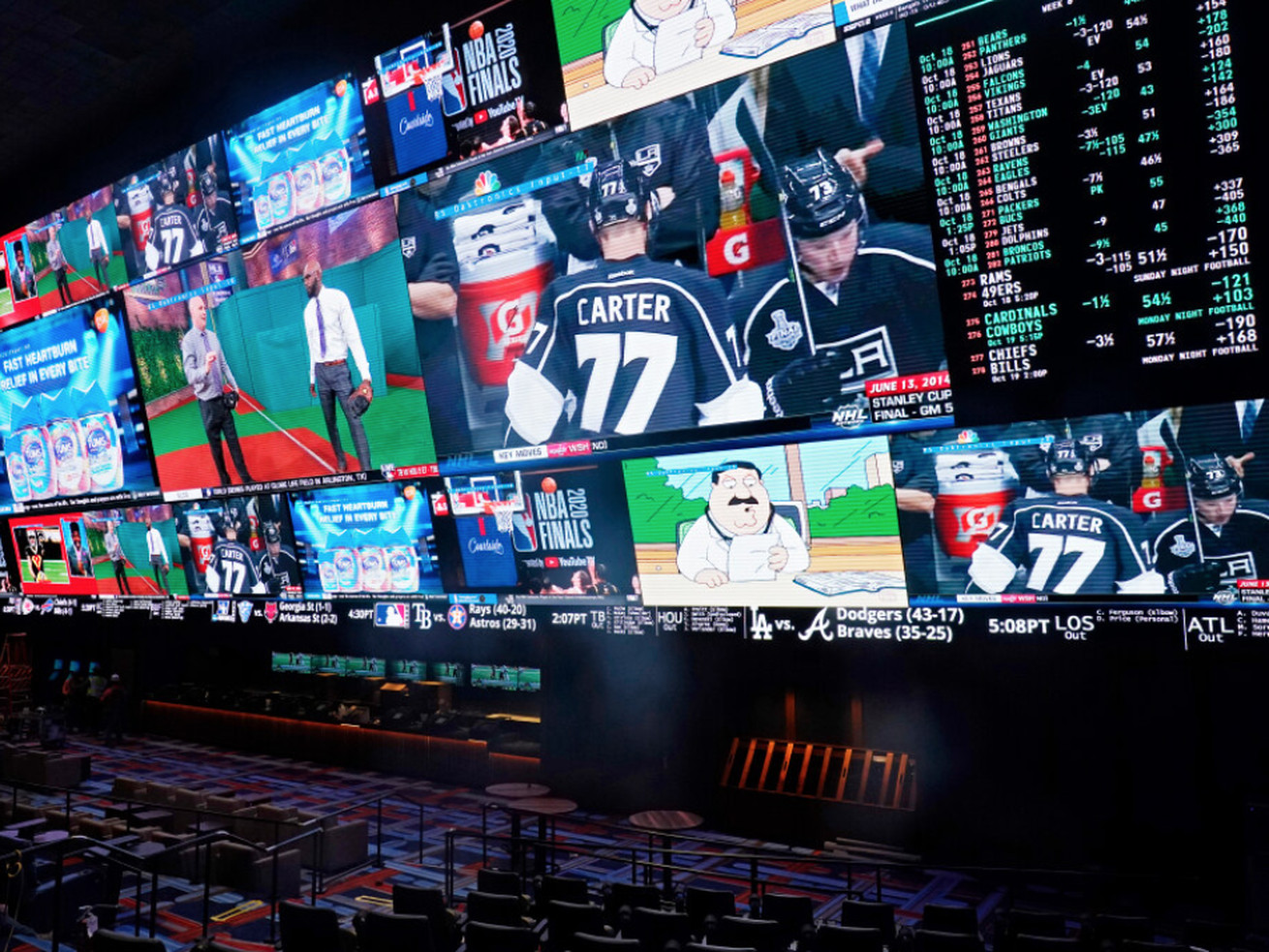 Screens show sports and betting odds in the sports book as workers finish work at the Circa Resort & Casino, Thursday, Oct. 15, 2020, in Las Vegas. The casino is scheduled to open in downtown Las Vegas in October. | John Locher/AP

Coronavirus has brought us a season unlike any other — on the field and in Las Vegas,

LAS VEGAS — During the 2019 college football season, one or two games a month shifted significantly from the Circa Sports opening line to game day, or within 24 hours of kickoff.

Because of coronavirus questions and concerns that have made 2020 so murky, Circa operations director Mike Palm has watched the lines of several games a week move six to eight points.

‘‘It’s really an unprecedented time,’’ Palm says. ‘‘It’s the uncertainty. There are two to three instances a week that we open with the wrong favorite, the way the line ends up.

‘‘There is so much volatility to the market right now because of that uncertainty. I thought it was a bad thing at first, but it isn’t like we’ve been wrong on every one of those opening lines.’’

As an example of that turbulence, Circa Sports director Matt Metcalf and his team opened Air Force as a 1.5-point favorite over Navy when they unveiled their lines at 11 a.m. Sunday, Sept. 27.

Money flooded in from wise guys, the smart professionals who fly into Vegas every weekend to prey on Circa’s openers. An avalanche of cash and subsequent steam made Navy a seven-point favorite at kickoff on Saturday, Oct. 3.

‘‘Air Force absolutely blew them out,’’ Palm says, ‘‘so the money was all the wrong way.’’

He doesn’t gloat, though, about getting the best of it in any single game. Neither do contemporaries, all of whom are dancing to strange tunes these days.

‘‘Hey, we’re ballerinas now,’’ South Point oddsmaker Vinny Magliulo says. ‘‘We’re having to move numbers quicker and in bigger increments . . . and is that a false move? My toes are definitely sore, but you always have to be on your toes in this business.’’

The South Point, like many shops, lists advanced lines on the biggest games of the season. A month ago, it pegged Clemson as a 7.5-point favorite Saturday against Notre Dame in South Bend, Indiana.

Clemson has played in the last five College Football Playoffs, winning national championships in 2016 and 2018. It won its first six games of 2020, and the No. 1 Tigers would move to double-digit favorites against the No. 4 Irish at the South Point.

‘‘And with Notre Dame,’’ Magliulo said then, ‘‘you’ve seen some inconsistencies.’’

One offshore book had Clemson favored by 14.5 points when, on Oct. 29, the program revealed that star quarterback Trevor Lawrence had contracted the virus. Within an hour, that book had removed the Clemson-Notre Dame game from its board.

Lawrence would have been able to play against Notre Dame if he tested symptom-free through Friday, but Clemson coach Dabo Swinney didn’t expect expedient test results and ruled Lawrence out for the game.

One offshore book immediately posted the 7-0 Tigers as 6.5-point favorites against the 6-0 Irish. On Sunday, Circa opened with Clemson favored by five points.

Had that number remained in double figures, the challenge for Notre Dame would have been daunting. In the last 40 years, it has been a double-digit home underdog nine times. It covered six times but outright won only once, a 28-20 victory against Michigan as a 12-point dog on Sept. 11, 2004.

‘‘That has really hurt them,’’ he says. ‘‘They’ve become pretty vanilla. They’re solid, very good defensively; they’re just not going to be explosive.’’

Palm grew up in Iowa and went to Notre Dame, so the upper Midwest is his college-pigskin wheelhouse. With a healthy Lawrence, Palm says nobody can stay within three touchdowns of Clemson.

But without the quarterback with the long blond locks? It’s just one more question in a season full of them.

FIRST DIBS AT CIRCA

For every college football weekend this season but the first one, handicapper Paul Stone has left his home in Tyler, Texas, late Friday morning to catch a flight to Vegas.

So when Circa reveals the industry’s first college football odds on Sunday mornings, Stone has been poised to digest them and bet, in no small sums, the most advantageous situations.

Totals are his forte, and his 17-8-1 record in that category has Paul Stone Sports ranked No. 1, by percentage, on a list of 40 handicapping services rated by the independent Sports Monitor of Oklahoma.

His soft-spoken manner and understated demeanor belie the loudmouth nature of the arena. On Sunday, Sept. 18, he quickly bet the under in Illinois-Wisconsin, a game whose opening total was 59.5. Two hours later, he flew back to Texas.

Less than 24 hours later, the total had been whittled to 50.5. Typically, that would have triggered Stone to act the other way, a bet of up to 50% of his original wager on the over, because a nine-point variance is manna to a professional.

Instead, he stuck with his main play. The game closed at 52.

‘‘I do that quite often with these tickets that have a lot of value,’’ Stone says. ‘‘A day or two before a game — even day of — does present an opportunity to get favorable positions for a middle.’’

At home in Texas on Monday, Oct. 26, he learned of No. 10 Wisconsin’s woes and quickly took a position on Nebraska plus-7.5 points. The total was 55, and he bet the under. Both would become null and void when the game Oct. 31 got canceled because of a virus outbreak on the Badgers.

Professional handicapper Teddy Covers advises recreational bettors to wager deliberately and carefully. His volume is way down, as he has played only one or two games some Saturdays.

He had taken seven-point favorite Southern Mississippi against Louisiana Tech, which was missing multiple players, on Sept. 19. Southern Miss had played a game, but this was Tech’s first — and it rallied from a 17-point deficit to win 31-30.

‘‘Louisiana Tech was competitive,’’ Covers says. ‘‘This is a different season for casual bettors. What you see one week isn’t necessarily what you’re likely to see the next. Bettors need to be aware. Accept the uncertainty and reduce your unit size.’’

In years past, Cokin would be done for the week, picks selected, by Tuesday or Wednesday. This season has demanded more time.

‘‘I reluctantly wait more than I usually do,’’ he says. ‘‘There’s late information coming in every week, and then you see major movements.’’

In that Air Force-Navy game, the waiting paid off. He nabbed nearly seven points — providing extra security but ultimately unnecessary — with the Falcons.

‘‘Just a horrible overreaction,’’ Cokin says. ‘‘Navy stinks. I’m not sure where all that [steam] came from, but I’m glad they did it. Had Air Force been the favorite, I probably would have left it alone. One of the easier bets I’ll ever make.’’

‘‘Boise QB out,’’ Cokin tweeted. ‘‘Positive test. Just when I thought this day couldn’t get any worse.’’

Cokin didn’t have a good day, but the Broncos represented his highest-rated multi-unit play. His pragmatism has guided him to nearly a 60% success rate. He harbors the healthiest of tacks, dealing with stuff as it happens and moving on.

‘‘That’s life in general,’’ Cokin says. ‘‘[Expletive] happens. Nothing you can do about it anyway. If there’s a bump in the road, you try to get around it.’’

The Big Ten and Pac-12 canceling their seasons and then reversing course, when other conferences had formulated plans and protocols to play, made both leagues look foolish, like followers.

‘‘Why did they have to decide so quickly not to play?’’ Palm says. ‘‘They could have taken their time. I don’t think it was a great look.’’

The Pac-12, whose teams have six-game schedules, starts this weekend. Stone is keen to watch No. 12 Oregon’s quarterback battle between unproven sophomore Tyler Shough and versatile senior transfer Anthony Brown, who threw for 4,738 yards and 40 touchdowns at Boston College.

Legendary broadcaster Brent Musburger has made only one college football wager — on Alabama to win it all at +425 (bet $100 to win $425).

‘‘I will tiptoe back to the Big Ten to take a peek at Ohio State,’’ he says, ‘‘and I could hedge on Clemson if they play Alabama heads-up in a game.’’

Notre Dame could help itself Saturday. If No. 5 Georgia (4-1) were to run the table, which would entail upending the Crimson Tide in the Southeastern Conference title game, Stone says the Bulldogs are ‘‘shoo-ins.’’

Magliulo had BYU power-rated higher than Notre Dame two weeks ago. On Sunday morning, he said the 5-0 Cougars were even with the Irish and would deserve playoff consideration should they remain unbeaten.

Purdue and Northwestern (both 2-0) play in Indiana next Saturday.

‘‘Some think, given its schedule, Purdue is very much alive,’’ Magliulo says. ‘‘Northwestern is getting some play, too. There’s always support for Northwestern. The Wildcats just play hard all the time.’’

Cokin doesn’t summarily dismiss a second Big Ten team from getting into the playoff, a scenario that would require Purdue or Northwestern to defeat Ohio State in the Big Ten title game.

Magliulo goes down another path.

‘‘If there ever was a year to expand the playoff, what about this year?’’ he says. ‘‘This is big business. They’ve lost a lot of games already, and they could gain a lot of revenue. We book those college playoff games like NFL playoff games [with high limits] because that’s how people bet them.’’

We reach a subdued conclusion.

Hopefully, in such college football chaos, the playoff actually will take place.