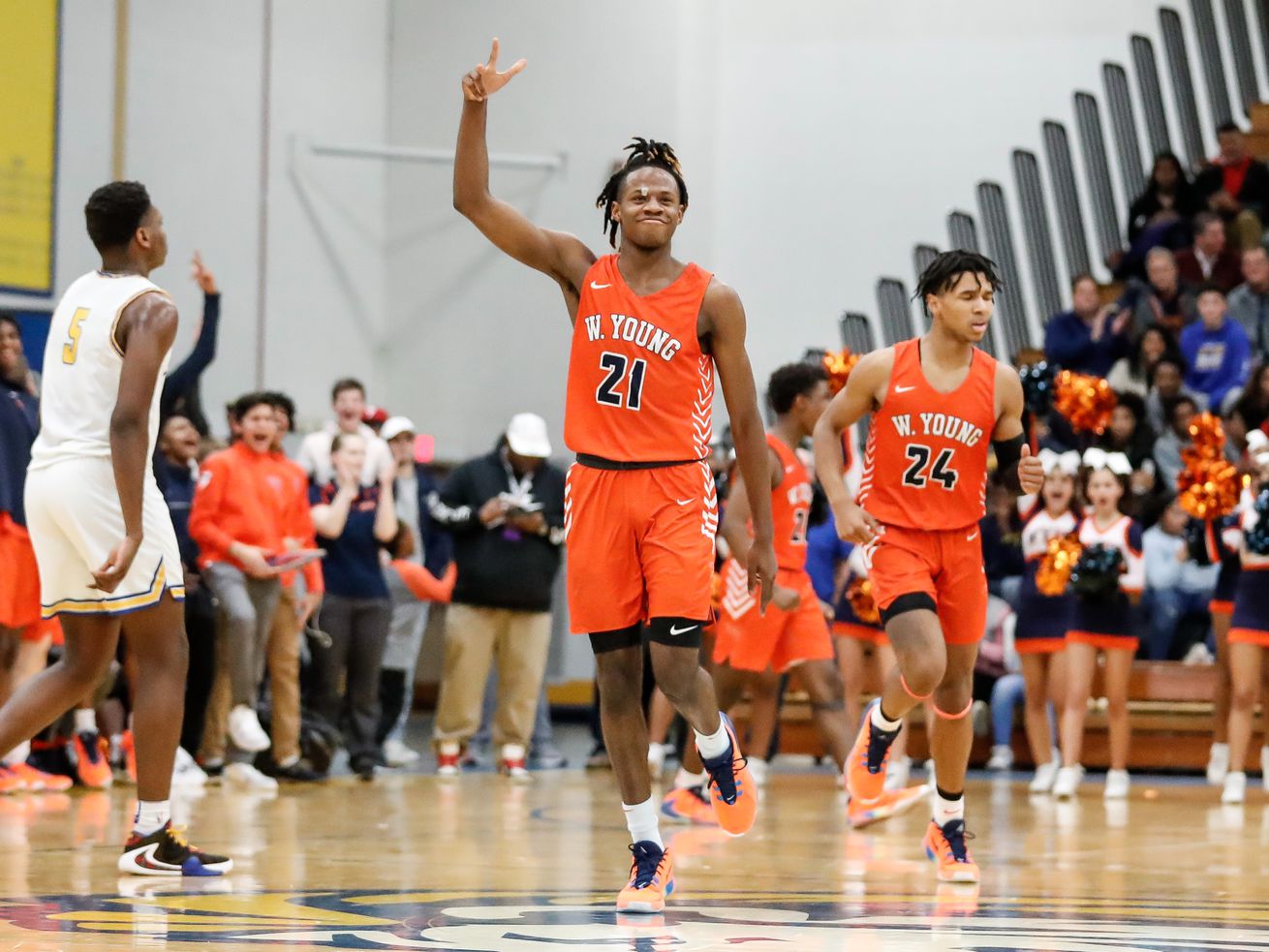 Young’s DJ Steward reacts during the game against Simeon. | Kirsten Stickney/For the Sun-Times

Times have abruptly changed in the basketball recruiting world.

It was a little over seven months ago when I headed to La Grange for a sectional semifinal showdown between Simeon and Young.

DJ Steward and the Dolphins pulled away from Simeon to advance to a sectional championship. But as I watched that game with colleague Michael O’Brien, Loyola coach Porter Moser and Southern Illinois coach Bryan Mullins, the feeling throughout that night wasn’t normal. In fact, it felt pretty dire.

On that particular March evening at Lyons, the doom and gloom centered around whether the state tournament would be played out in the coming week and if there would be a NCAA Tournament. The concerns over the virus were all so new and fresh that there weren’t really any thoughts or analysis of just what kind of stranglehold the pandemic would have on us all long term. We were all in the now.

Immediate postponements and cancellations followed. There would not be another high school game played and the spring evaluation period was completely shut down. The summer wasn’t really much better for the basketball world.

And now we head towards a National Signing Day in less than two weeks with fewer commitments and signings than any other November signing period.

Times have abruptly changed in the basketball recruiting world. Here are a few Covid Recruiting 101 tips, reminders and reasoning.

1. There are more significant reasons why you don’t have a scholarship than from just not being seen.

With fewer than 20 Division I and Division II commitments, there are fewer players who will be signing letters-of-intent in November than ever before.

There are parents griping that shutting things down “has ruined my son’s scholarship chances.”

While many will single out the lack of opportunities to be seen by college coaches as the primary reason, it’s not wholeheartedly true. There is way more to it than that.

A couple of weeks ago it was announced all players in NCAA Division I basketball will be given an additional year of eligibility due to the pandemic. Essentially any player, including current seniors, will have a chance to come back for an extra year. This leaves college coaches in complete limbo in trying to structure their roster.

Throw in the fact it’s expected the NCAA will pass a new rule in January allowing every player a free, one-time transfer without having to sit out, and the roster floodgates are about to completely burst open.

Unfortunately, many high school players are going to be left out in the cold as a result. Right now there is just no other way to look at it. College coaches will be scouring the transfer market like never before while continually re-evaluating needs on the fly as they navigate their rosters through the spring, figuring out who is staying, leaving and what ready-made transfer is available.

2. If you are in the Class of 2021 and you have a legitimate scholarship offer, you like the school and it seems like a fit, take it. And take it now.

Because of the aforementioned lack of opportunities that will be out there, this is no time to him-haw around when it comes to legitimate scholarship offers. Scholarships are like gold, and if you’re fortunate to be sitting on one and haven’t made a decision? Well, it might not be there long.

While it’s certainly a challenge to make a huge decision under these circumstances –– no official visits or even true unofficial visits are permitted –– if it checks off enough boxes, it’s time to jump on it. Whether it’s a Division I or Division II offer, it’s a scholarship offer that is coveted and you have one in a time where there is a shortage of them.

This isn’t to say you take any good ol’ offer thrown your way, but you need to look very quick and hard at that situation to see if it works for you. There are simply going to be far fewer spaces on rosters for current high school seniors –– and beyond, possibly –– than ever before.

3. The bar remains low with recruiting reactions on social media.

Is it the crankiness caused by covid that stirs up idiocy in basketball recruiting? Or is it just simply the continuation of the social media world sinking to new depths?

Whatever it is, the reactions of people –– I assume adults –– on social media when high-profile kids commit are sometimes mind-boggling.

I bring this up based on Fenwick’s Bryce Hopkins committing to Kentucky this past week.

Here’s a kid who handled himself the right way when he barely played any varsity minutes as a freshman at Fenwick. Since then he’s performed at an elite level, gone from unranked early in his career to a top 30 player in the country while staying true to Fenwick while other high schools and prep schools hounded him and his family to transfer.

And the first reaction of some people on Twitter in regards to the commitment is to immediately chide the decision?

There were instant forecasts of a transfer within a year. There were the “he went to the highest bidder” and “Khalil Whitney 2.0” tweets. And there was a good luck one, though even with that some sarcasm thrown in with the “good luck, you’ll need it” tweet.

Yes, they are all opinions, I guess, and everyone has them. And I get it if a Louisville fan is a little peeved and jaded. But come on. Those are the opinions that come to you when a high school star in the state commits to a Blue Blood program?

Here’s a genuine “congratulations” and “good luck” to Hopkins.