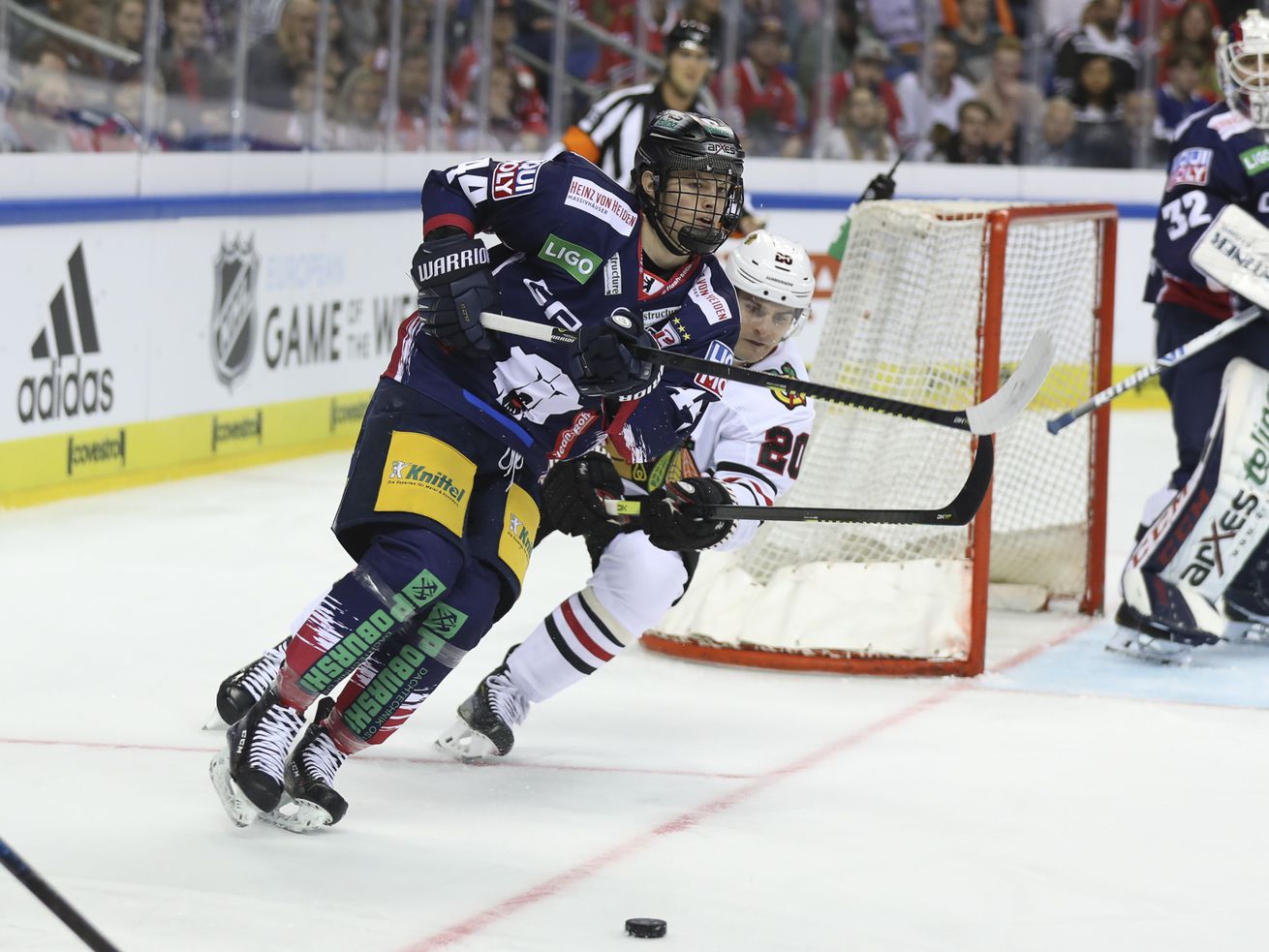 Lukas Reichel has a large role, even as a teenager, on Eisbaren Berlin’s roster. | Chicago Blackhawks Photo

Germany has produced four first-round NHL draft picks, including Reichel, since 2018 after previously producing only three in its history.

A year later, Hawks general manager Stan Bowman traced his first impression of Reichel, whom he made the Hawks’ first-round draft pick this month, back to that exhibition.

‘‘We weren’t paying attention to him when we were in Berlin for the start of the season, and I just remember noticing his speed and how fluid he was on the ice,’’ Bowman said. ‘‘I looked back again in late January for a trip in Europe, and I got a chance to see him play. It was a pretty impressive progression just over those couple of months.’’

The only reason Reichel was on Eisbaren’s roster, however, was because of a new rule implemented by the DEL — the top German hockey league — before last season began. The rule gave each team two additional lineup spots to be used exclusively for German players 23 or younger.

Stutzle (third overall to the Senators) and Reichel ended up giving Germany two first-round NHL draft picks for the first time in history, with Peterka (34th to the Sabres) not far behind.

‘‘It’s forcing them to play their young Germans and develop them,’’ said Allain Roy, Reichel’s agent. ‘‘You’ve got these kids aged 17 to 22, and they’re playing against a lot of American Hockey League-caliber players. It’s exciting for them.

‘‘When you see countries like Switzerland, Germany and Austria, the complaint has always been that they keep bringing in [North American] imports and not developing their own players. Now that’s changed, and it’s paying dividends.’’

That new rule was the latest in a series of initiatives by German hockey’s governing body to improve its grassroots development, an effort sparked by the German national team’s shocking failure to qualify for the 2014 Winter Olympics in men’s hockey.

The six years since have brought successes across the board. The German national team has risen steadily to seventh in the world rankings, barely behind the United States.

At least one German player has been taken in the first round of three consecutive drafts, with Dominik Bokk (Blues, now Hurricanes) in 2018 and Moritz Seider (Red Wings) in 2019 predating Stutzle and Reichel.

And, most notably, Oilers center Leon Draisaitl became the first German to win the Hart Trophy as the NHL’s most valuable player this past season. Former Hawks forward Dominik Kahun (Penguins) and goalies Philipp Grubauer (Avalanche) and Thomas Greiss (Islanders, now Red Wings) were other Germans who had strong seasons in 2019-20.

Reichel remains roughly two years away from NHL readiness, but the Hawks love his situation in Berlin.

‘‘If you looked at his situation, development-wise, it’s a perfect fit,’’ Hawks scouting director Mark Kelley said on draft night. ‘‘That was one of the attractions to him.’’

He learned in a winning environment, too: Eisbaren went 32-20, finishing fourth in the 14-team league. And while the DEL canceled the playoffs because of the pandemic, the regular season was concluded successfully, meaning 52 games is a full-length year.

‘‘For Lukas, he’s a bit of a late bloomer physically,’’ Roy said. ‘‘The fact they don’t play quite as many games in Germany . . . that’s very beneficial for him to work on his body and building up some muscle and getting bigger and stronger.’’

While most other European leagues began their 2020-21 seasons on time, the DEL remains paused indefinitely. But Berlin and seven other teams will compete starting Nov. 11 in a tournament called the Magenta Sport Cup.

Reichel has one year left on his DEL contract, Roy said, so he presumably will play out this season — whatever it turns out to be — with Berlin. After that, they’ll talk about an entry-level contract with the Hawks, although he might need to spend 2021-22 in the AHL.

No matter the exact timeline, the Hawks have extremely high hopes for the latest product of Germany’s revamped hockey culture.

‘‘Those more instinctive-type things — the way they can roll off players, their vision, their anticipation for where the play’s headed next — those are the things we noticed, and Lukas has all that,’’ Bowman said.