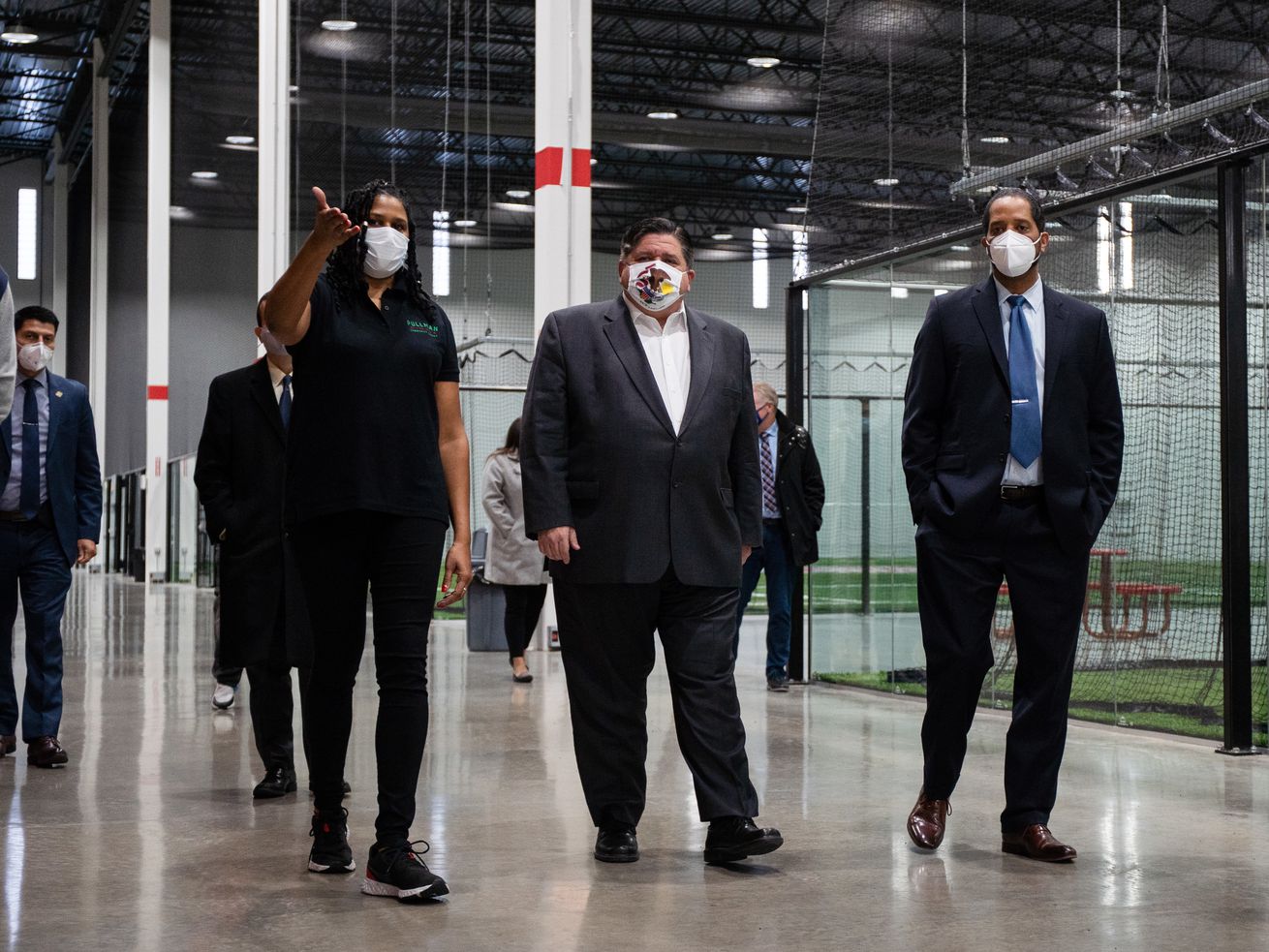 Get the latest news on how COVID-19 is impacting Chicago and Illinois. Follow here for live updates.

Add another twist to this week’s winter sports saga.

On Thursday Gov. J.B. Pritzker said that winter high school sports, including basketball, would be “moved into spring.” That statement comes just two days after Pritzker announced they were “on hold.”

The Illinois High School Association countered the “on hold” statement on Wednesday by defying the governor and announcing that basketball would start as planned on Nov. 16. That move leaves the actual decision of when to play up to local school districts.

While Pritzker didn’t specify what “on hold” meant on Tuesday, most assumed a hold meant that basketball’s status would be re-evaluated during the winter and possibly started up in December, January or even February. He was more specific in a press conference on Thursday.

“We aren’t saying these sports won’t be played,” Pritzker said. “We are delaying the play of these sports. We are saying do training, do conditioning. Even the high-risk sports there are things they can do. It’s not like we are shutting the sports down. But these are all being moved into the spring with the hope that we will be seeing vaccines and treatments that will be effective.”

Dozens of Cook County workers rallied outside Stroger Hospital on Wednesday to demand hazard pay and other protections as the state grapples with a second wave of COVID-19 infections.

With their current contract set to expire at the end of next month, a spokesman for SEIU Local 73 claimed Cook County President Toni Preckwinkle has refused to bargain over the union’s demand to increase workers’ pay during the pandemic.

“They’re willing to walk away from the table over this,” said Eric Bailey. “You’ve seen what’s happening with the pandemic in the last couple days just here in Cook County. The numbers are skyrocketing [and] people are dying.”

Public health officials in Illinois reported 6,363 new cases of COVID-19 on Thursday, setting yet another troubling record for the most infections ever confirmed statewide in a day.

A stunning viral resurgence is sweeping the state, with more than 102,000 people ha positive for the virus so far this month alone — about 12,000 more than were reported in Illinois during all of May and June, when the state rose and fell from its initial coronavirus peak.

And expanded testing doesn’t fully account for October’s sky-high caseloads. The new infections were confirmed among 83,056 tests submitted to the Illinois Department of Public Health.

That raised the state’s seven-day average testing positivity rate — a better gauge of how rapidly the virus is spreading — to 6.9%, its highest point since June 2.

Small businesses were awarded more than $46 million in business interruption grants, while 163 municipalities outside of Cook, DuPage, Kane, Lake and Will counties received over $48 million in grants.

Pritzker said the grants are intended to keep small businesses “going and growing” despite the “exceptionally hard time” many businesses now find themselves in because of the pandemic.

The second round of interruption grant funding has been released to 1,238 businesses in over 340 communities; $12.4 million will go to businesses in Chicago, officials said. The city has seen a total of $33 million in business grants so far, Pritzker said.

U.S. District Chief Judge Rebecca Pallmeyer also said civil jury trials would be suspended effective Nov. 9 under the terms of a new general order. She said she would undo, alter or extend the order no later than Jan. 26.

Pallmeyer said bench trials could go forward — and are even encouraged — as long as out-of-state witnesses properly quarantine or testify remotely. In-person hearings are otherwise “limited to situations in which remote procedures are unavailable.”

Developers and mayors vying for the chance to break ground on new casinos — including two in Chicago’s suburbs — will have to wait at least another six months to find out if they’re holding a winning hand.

Illinois Gaming Board administrator Marcus Fruchter blamed the COVID-19 pandemic for pushing back his agency’s timeline for handing out the first round of casino licenses as part of Gov. J.B. Pritzker’s massive statewide gambling expansion.

“Like all government agencies and private businesses, the board’s work has been impacted by COVID-19,” Fruchter said at a special Gaming Board meeting held virtually Thursday. “This is not an excuse or a crutch. It is simply a recognition of the realities that work and life are different in a global pandemic.”

The coronavirus wasn’t a part of everyday life in October 2019 when casino applicants submitted 10 separate proposals for five licenses to the Gaming Board, which is responsible for vetting and approving those bids. The perpetually understaffed agency is also tasked with policing the state’s 10 existing casinos and 36,000-plus video gaming machines at bars and restaurants — not to mention rolling out the state’s newly legal sports betting industry.

An out-of-work travel agent whose mortgage payments were deferred now worries about losing her house. A couple can’t pay their bills after the $600 unemployment bonus ran out. An idled maintenance supervisor has fallen further behind on rent.

Since the start of the coronavirus pandemic, many people have edged closer to financial calamity, while others have finally landed full- or part-time jobs.

Here are some of their stories:

In Naperville, Rachel Metcalfe, 23, is starting to see her health and her finances emerge from the depths.

In early spring, she had been hospitalized after contracting what she believes was COVID-19. She also had been furloughed from her social media marketing job and couldn’t pay an $11,000 bill for a hospital stay to cover expenses including a coronavirus test, which is supposed to be free. Metcalfe had launched a GoFundMe effort to cover her blood work, X-rays and CT scan.

She still has minor chest pain symptoms, she says, but her health has improved.

Metcalfe has gotten a part-time job as a retail assistant manager that pays $5 an hour less than what she made at her old full-time job. But she might be able to go back to her social media job in the coming weeks as her employer’s offices reopen.

Read this and more stories from across the U.S. here.

According to several sources, the Illinois High School Association will announce Wednesday that the basketball season can start as scheduled. It’s a totally unexpected move that directly contradicts the guidelines Gov. J.B. Pritzker and the Illinois Department of Public Health outlined on Tuesday.

Pritzker and the IDPH put winter sports on an indefinite hold and moved basketball from a medium-risk sport to a higher-risk sport in the IDPH guidelines.

‘‘As with sports in the fall, nothing is ‘canceled,’ just put on hold until we’re through the thick of this pandemic,’’ Pritzker said in a statement.

According to the IHSA calendar, basketball practices are scheduled to start on Nov. 16 and the first games can be played on Nov. 30

“After diligent discussion, the Board has made the decision today to follow the recommendation of the IHSA SMAC as it relates to basketball,” IHSA spokesperson Matt Troha wrote in an email to athletic directors. “The Board remains considerate of rising COVID-19 cases in Illinois and understand the importance of adhering to safety guidelines for the good of all citizens. However, the Board has not been presented any causal evidence that rising COVID-19 cases make basketball more dangerous to play by the IDPH or any other health organization nationally or internationally.”

8:29 a.m. Looks like the coronavirus is bringing out the worst in some of us

But the “Most Selfish Chicagoan” award goes to Jessica, 21, and Jayla Hill, 18, two sisters who allegedly stabbed a store security guard 27 times because he confronted them about not wearing a mask while in the store.

Witnesses described a chaotic scene with one woman stabbing the man while the other held him by his hair.

Where have these women been?

The face-covering mandate has been in place in Illinois for nearly seven months.

That this violent incident was sparked by a store employee’s attempt to enforce the face-covering mandate at a time when there is a surge in coronavirus infections is telling.

Too many of us still don’t get it.