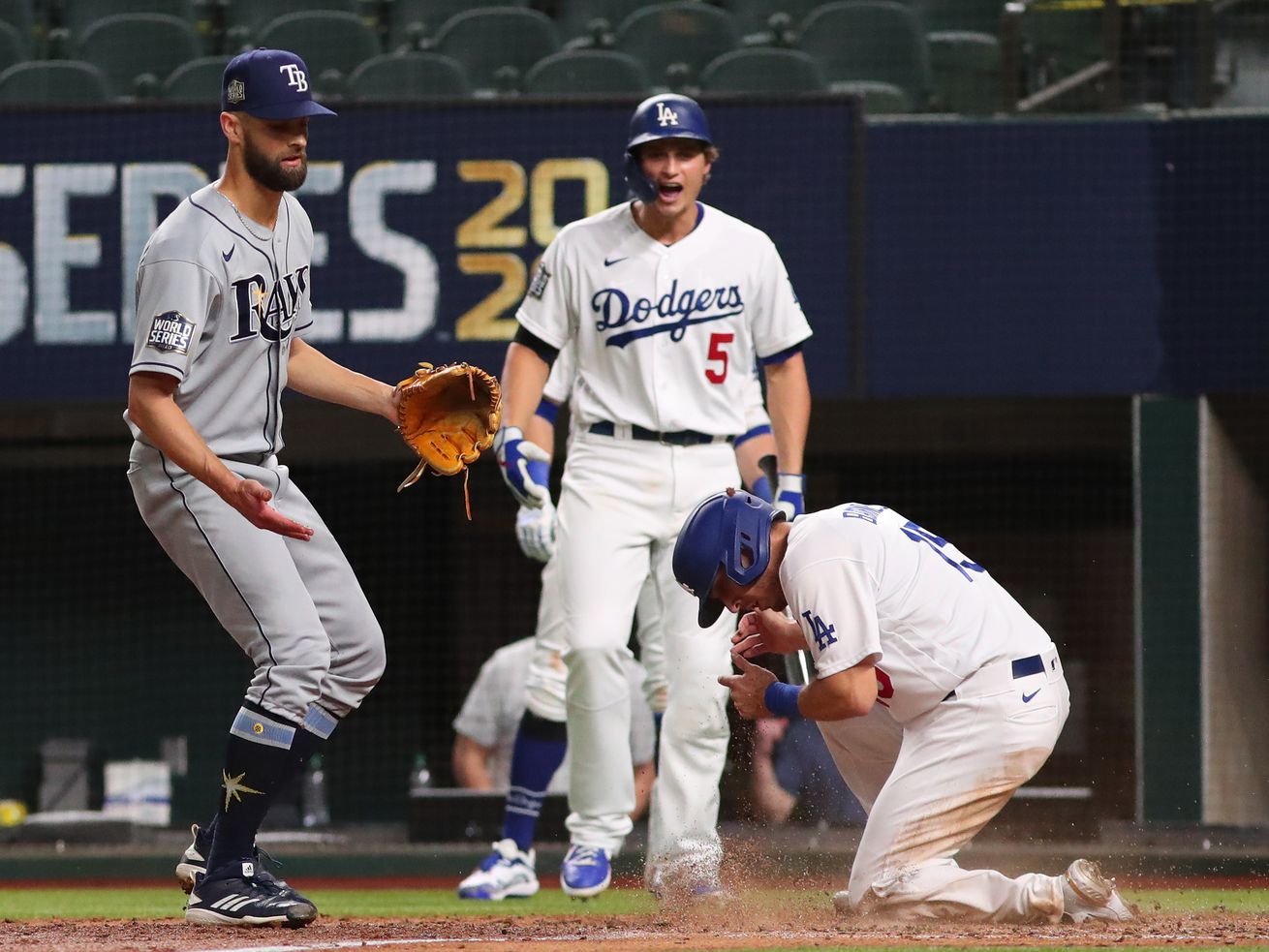 Even though the World Series finished as the least-watched ever, Games 5 and 6 are the two most-watched non-NFL sportscasts since sports shut down in March, according to Sports Media Watch. | Getty Images

Ratings for major televised sports are down. You might not think that’d be the case during a pandemic that has kept fans out of stadiums and on their couches. But there is indisputable visual evidence, as broadcasters like to say, of decreased viewership.

According to Sports Media Watch, the Stanley Cup Final was down 61%, the NBA Finals were down 49%, the World Series was down 30% and the NFL was down 13% through five weeks.

Remember in the spring, when sports had shut down, how we longed for a live event of any kind? An exhibition golf match with Tiger Woods, Phil Mickelson, Peyton Manning and Tom Brady drew 5.8 million viewers, making it the most-watched golf broadcast in cable TV history.

But the final round of the U.S. Open had 3.21 million. It didn’t have a chance after being moved because of the pandemic from June to September, when it competed with college football and the NFL. That density of sports programming is one reason why major sports are suffering across the board.

Look at the NBA playoffs. Even with some fantastic series and incredible performances, it was down 37% overall. It likely was hurt by many early-round games being played in the daytime, but more so that it was out of season. The Finals were in October, going up against the MLB playoffs and the NFL.

There are some who overlook that fact and politicize the NBA’s ratings drop, claiming that calls for social justice by the league and its players turned off viewers. Researchers say those people haven’t contributed to the drop nearly as much as they’d like to think.

But politics are another reason for the overall decline. It’s an election year, and news viewership is up big. This isn’t a new phenomenon. During the last presidential election season in 2016, the NFL was down double figures, too. Of course, a down year for the NFL would be a huge year for anyone else.

Also, people’s habits have been disrupted during the pandemic. Fewer people have kept their routine of coming home from work and plopping on the couch to watch a game. They’ve been home all day. Other people might not be enamored with fake crowd noise or fan-less games. Don’t forget the growing cord-cutting crowd, too.

Still, live games rank among the most-watched programs on TV, even with decreased viewership and increased news consumption. Pick a recent week, and you’ll find the top shows are either live news or live sports.

NFL games held three spots, led by the Sunday night Seahawks-Cardinals game, which ranked third with 14.31 million viewers. The Monday night Cardinals-Cowboys game was fifth at 11.83 million, and the Thursday night Giants-Eagles game, which aired during the debate, was 10th at 10.47 million.

Rays-Dodgers World Series games held spots 11-14, ranging from 9.11 million to 10.06 million. And even though it finished as the least-watched Series ever, Games 5 (10.06 million) and 6 (12.27) are the two most-watched non-NFL sportscasts since sports shut down in March, according to Sports Media Watch.

The sports TV industry is not in decline. Networks will continue to pay for broadcast rights. Turner recently agreed to a seven-year, $3.2 billion deal with MLB, NBC is expected to have competition for the NHL when its deal expires after next season and the NFL figures to set records with its next deals.

The viewership drops, while alarming on their face, are temporary. Eventually, the sports calendar will return to normal, and people’s viewing habits figure to follow. The question is, how long is temporary?