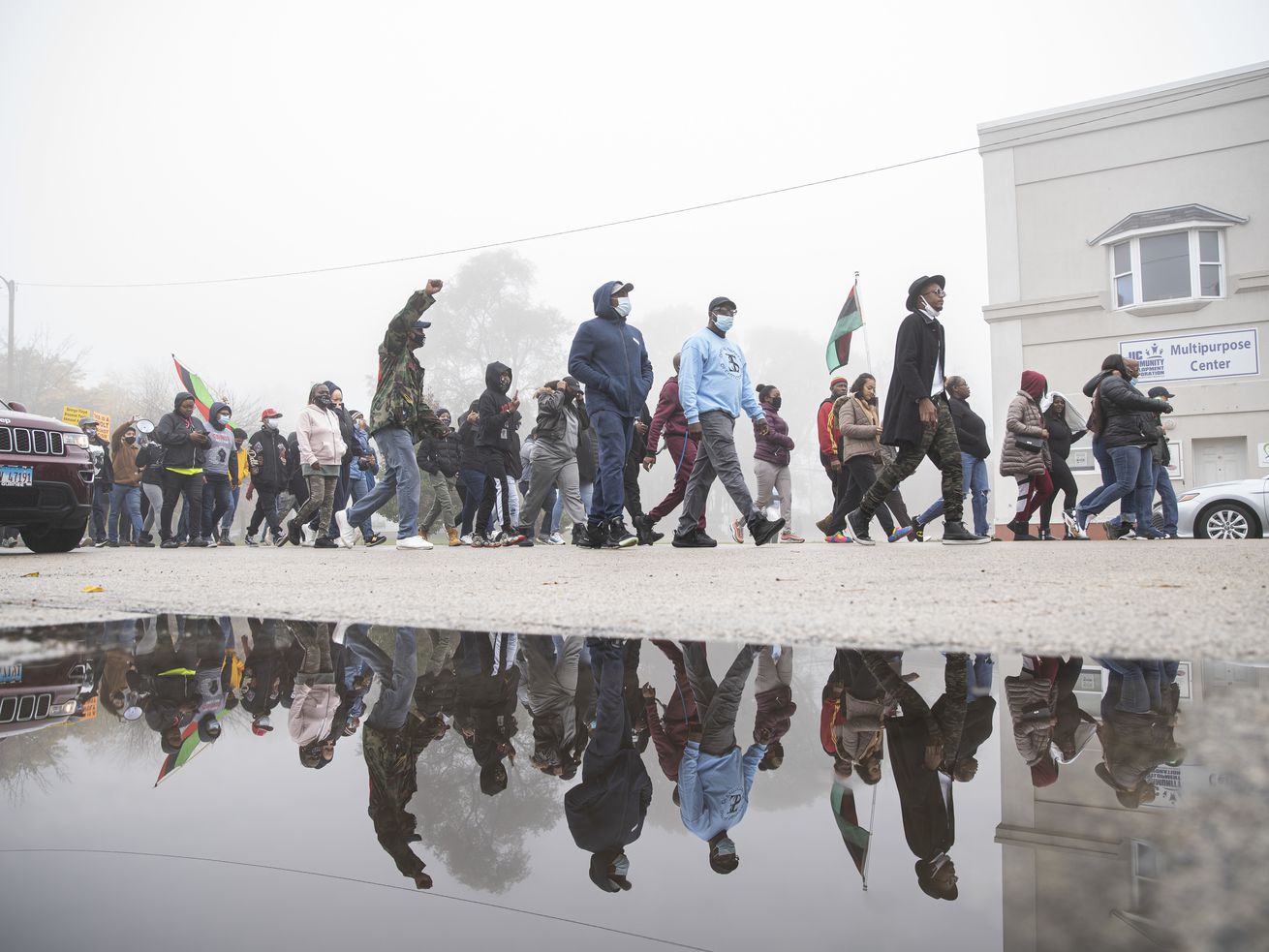 Protesters march during a rally and protest against police brutality after Marcellis Stinnettte,19, was fatally shot by police in Waukegan, Thursday, Oct. 22, 2020. | Anthony Vazquez/Sun-Times

Meanwhile, the FBI is assisting with the shooting investigation.

The Waukegan police officer involved in the fatal shooting of a teen has been fired “for multiple policy and procedure violations,” the city’s police chief announced Friday.

No other details were provided in Chief Wayne Walles’ brief announcement, which noted the Illinois State Police are continuing to conduct an independent investigation of the killing of 19-year-old Marcellis Stinnette, who was shot by the Waukegan officer in the northern suburb. The FBI is assisting the State Police in that effort.

In a statement, Lake County State’s Attorney Michael Nerheim said he contacted the U.S. Department of Justice Wednesday, and the department agreed to review the circumstances surrounding the shooting.

“The FBI is aware of the death of Marcellis Stinnette and will review all available facts of the incident to determine if a federal response is warranted,” FBI Special Agent Siobhan Johnson said.

“I am confident in the work being done by the Illinois State Police and welcome the assistance of the FBI,” Nerheim said.

The incident began shortly before midnight Tuesday when an officer went to investigate a vehicle near Liberty and Oak streets, Waukegan police said in a statement. The car drove off from the officer but was found moments later by another officer. As that officer walked up to the car, the car reversed and the officer fired his pistol out of “fear for his safety,” police said.

Stinnette, a 19-year-old Black man, and his girlfriend Tafara Williams, who was driving the car, were both shot. Stinnette died from his gunshot wound at Vista Medical Center East, according to Lake County Coroner Howard Cooper. Williams survived and underwent surgery Thursday, according to her family.

The officer, who initially was placed on administrative leave, is Hispanic and has five years on the force, police said. Body camera and squad car footage of the incident is being reviewed by investigators.

“As I have said before, once the investigation is concluded, all the evidence will be reviewed and a final decision will be made with respect to any potential charges,” Nerheim said.

The shooting sparked outrage as it comes amid nationwide protests calling for an end to police brutality and racial justice.

On Thursday, protesters gathered outside a Waukegan police station, demanding justice for Stinnette and casting doubt on the Police Department’s version of what happened.

“I want justice for her,” Johnson said of her daughter. “I want the police to stop killing. You opened fire … for what? It’s not making sense to me. It’s not adding up,” said Williams’ mother Tina Johnson during the protest.