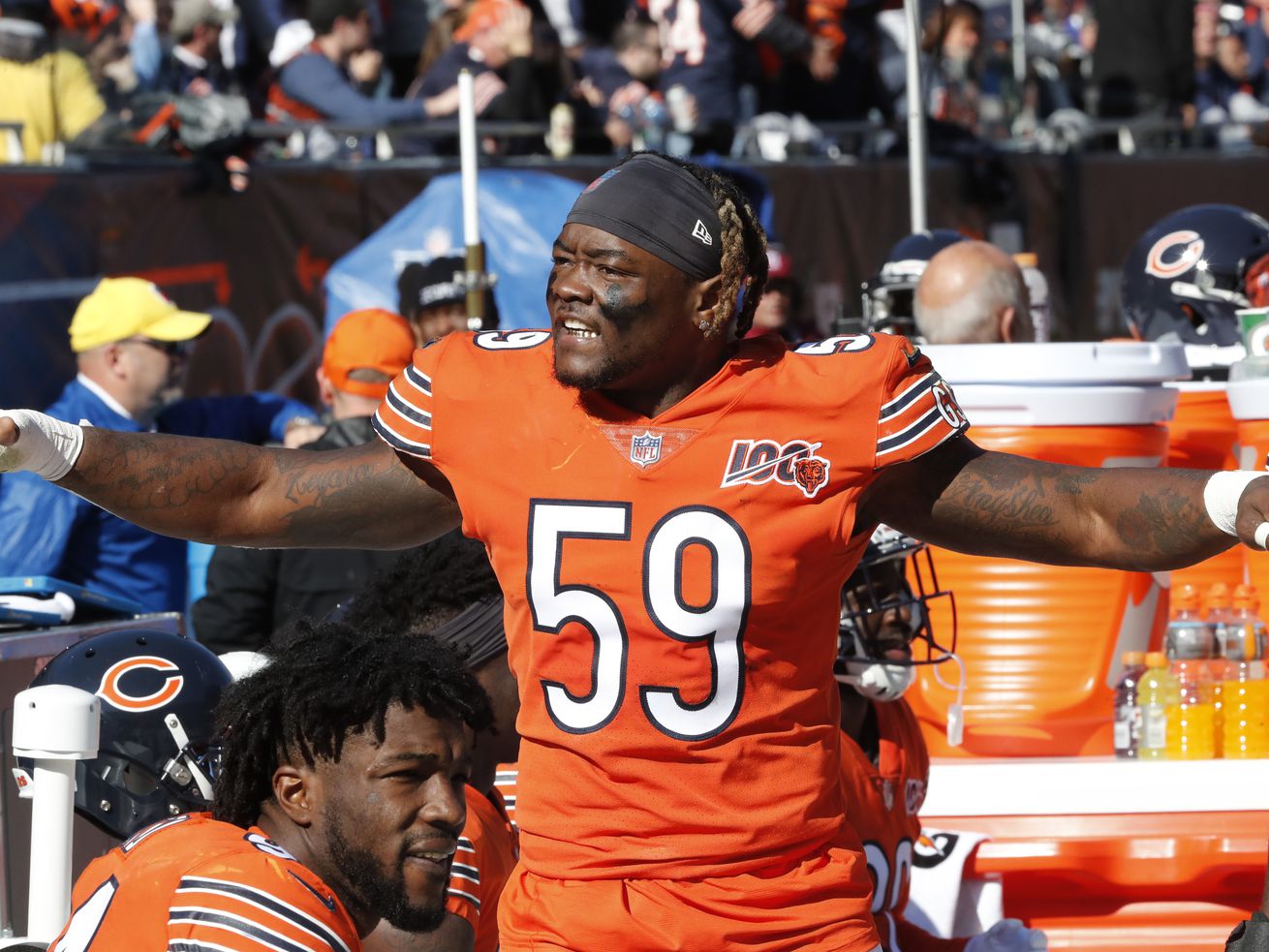 Danny Trevathan, entering his ninth season, has been one of the most influential players in the Bears’ locker room. | AP Photos

In their first public comments since protesting by canceling practice Thursday, the Bears continued their push for racial equality with strong statements after their scrimmage Saturday.

In the minds of many in the Bears’ organization, there was no better use of their time together Thursday than to have an honest conversation about racial injustice. The ongoing police brutality and systemic racism against Black people matters more than practice — or even a game.

The Bears joined the NBA, NHL and several MLB teams in drawing attention to a white police officer in Kenosha, Wisconsin, repeatedly shooting Black man Jacob Blake in the back and leaving him paralyzed from the waist down. The NBA shut down for three days and the NHL for two — both in the middle of their playoffs — and multiple baseball games were postponed because of player protests.

The Bears arrived at Halas Hall early Thursday but never took the field.

‘‘Let me say this: Football is a game,’’ outside linebacker Robert Quinn said. ‘‘What we’re talking about is real life. One day we’re all going to be done playing football, and I’m going to still have to live as a dark-skinned, Black African American.

‘‘At the end of the day, my skin is dark and football is a game. And American history has shown that they belittle dark-skinned people. So while I’m playing this game, I’m going to play it to the full max. But I’m not going to put no game before my goddang life.’’

Quinn, a 30-year-old who grew up in South Carolina, spoke passionately after the Bears’ scrimmage Saturday at Soldier Field, as did linebacker Danny Trevathan and coach Matt Nagy.

Quinn continued driving home the point that being a professional athlete doesn’t insulate him from discrimination in society or when stopped by the police.

‘‘What happened in Kenosha is nothing,’’ he said. ‘‘That’s American history for you. People that look like me have been hunted for a long time. . . . This Kenosha thing ain’t no one-time incident.’’

In a sign of how much things have changed since former 49ers quarterback Colin Kaepernick lost his career over taking a knee during the national anthem in 2016, athletes who boycott over the same issues now often are celebrated and supported.

Nagy, who promised after George Floyd’s death in May at the hands of police in Minneapolis to make these issues a priority, said flatly the Bears would support any player who felt compelled to sit a game as a demonstration against racial injustice. He said he was moved by the player-led meeting Thursday.

‘‘When that stuff happens and it’s very raw and it’s not scripted . . . it’s really, really making us strong right now,’’ Nagy said. ‘‘We’re really pulling together in a powerful way.

‘‘That day was about the players; it was about their voice. . . . It was their day, and I’m just very proud of where we’re at right now as a team. I think we’re as strong as we’ve ever been, together and united. It’s nothing but love right now for us. You just feel it.’’

In addition to Kenosha being only 35 miles north of Halas Hall, the story also hit close to home when Bears legend Brian Urlacher ridiculed the athlete protests and showed support for 17-year-old Kyle Rittenhouse, who is accused of killing two people amid the protests.

Urlacher’s social-media activity was so inflammatory that the Bears released a statement denouncing his views.

‘‘We saw it,’’ Trevathan said. ‘‘You have to see the bigger picture. There’s a bigger picture out here. If you really take a look, it’s real life. People might be stuck in their ways. Some people want to be stuck.’’

The Bears were one of 10 NFL teams to cancel practice Thursday. The handful of coaches who were setting up the field before it was nixed wore Black Lives Matter shirts that read ‘‘Am I next?’’ on the back.

The team resumed football activity with a walkthrough Friday in Lake Forest before somewhat simulating a game Saturday in an empty Soldier Field.