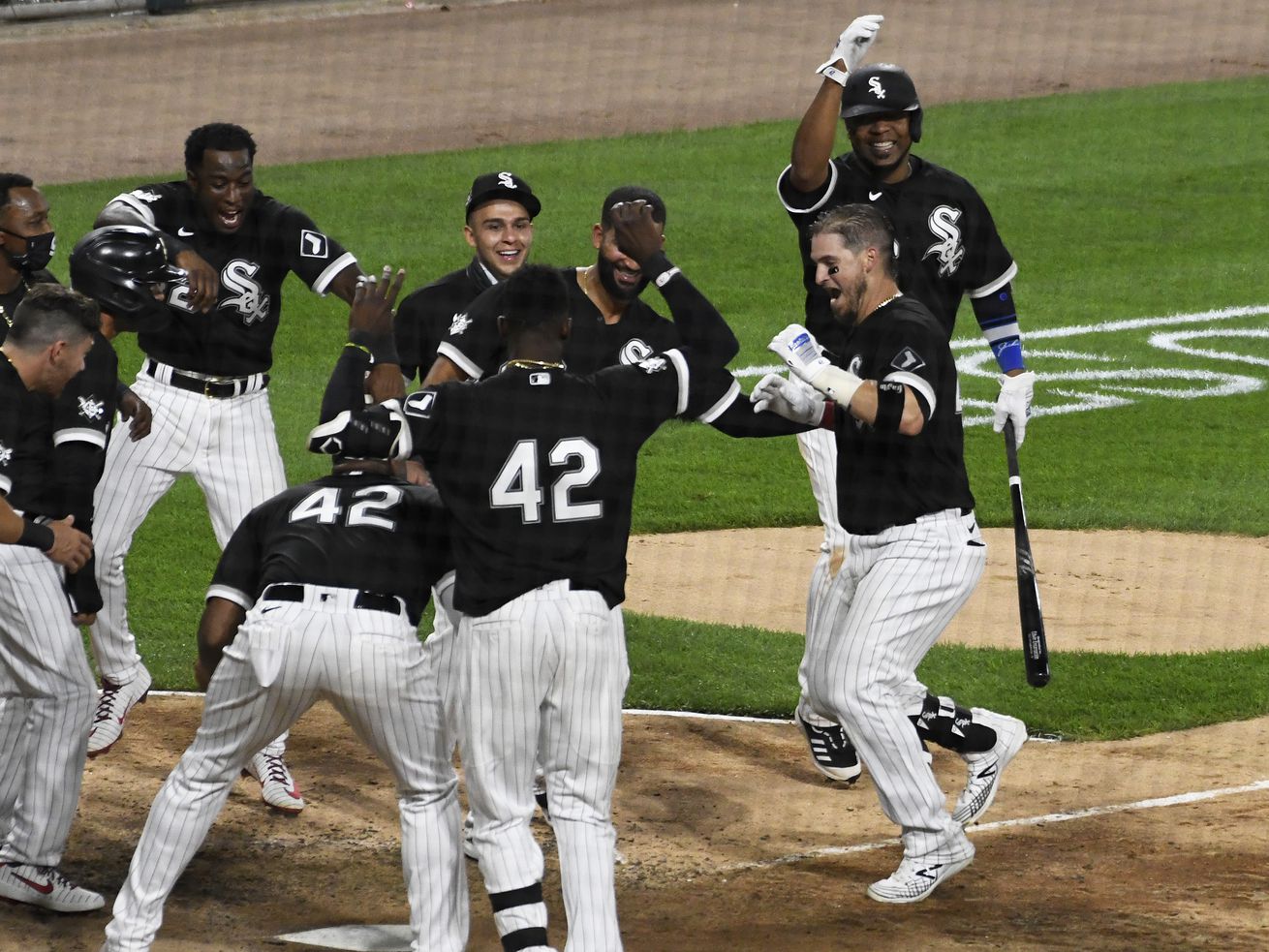 The Sox’ latest win came on the annual commemoration of Jackie Robinson breaking the color barrier.

Jackie Robinson Day is always an important date on the baseball calendar. This season, it felt even more consequential.

In purely baseball terms, it also mattered for the White Sox and Yasmani Grandal.

On Friday, the Sox beat the Royals 6-5 on Grandal’s ninth-inning walk-off home run that moved them into a first-place tie in the American League Central. The dramatic victory came on the annual commemoration of Robinson breaking the color barrier after it was shifted from April 15 because of the COVID-19 pandemic.

“We were waiting for this moment,” Reynaldo Lopez said, “and now that we’re [in first place], it’s a really sweet moment for us, and it’s a reward for all the work we’ve been putting in in the past and that we continue doing in the present.”

Eloy Jimenez and Luis Robert also homered, Lopez allowed two runs in four innings and the Sox won a game that was moved up to 6:10 because of a forecast for inclement weather. And they made it interesting.

With one out in the ninth against Alex Colome, Kansas City’s Maikel Franco’s line drive fell into left-center. He overran first and was caught in a rundown but eluded Jose Abreu’s tag before getting to second. Abreu then threw home, but Grandal wasn’t expecting the ball, and it got past him, allowing Bubba Starling to tie the game at 5.

But Grandal made sure the top of the ninth was a footnote.

“I told myself, just take a shot, see what happens,” Grandal said. “If not, get on base and hopefully [Abreu] can get me in.”

The Sox’ latest win came on what manager Rick Renteria called a “big day for the game of baseball for what Jackie meant to us as baseball goes and as a society.” And as for athletes using their platform to raise awareness and work to bring change, Renteria said he’s “totally behind” any decisions players make to use their voices, and that it “behooves us to be able to listen.”

“It puts an exclamation point on some of the gravity and importance of some of the points that need to be made,” Renteria said. “It’s not a situation that’s comfortable for many, I’m sure. But they’re trying to emphasize and bring to light some of the things that they’ve been having to deal with over so many years. They’re probably saying, ‘Enough’s enough,’ and they want to make sure that there are changes truly occurring and there are adjustments to how we deal with everyday life.”

This was the Sox’ first game since Wednesday afternoon, when the NBA’s Bucks became the first sports team to choose not to play in the wake of the police shooting of Jacob Blake in the back in Kenosha, Wisconsin.

Before this game, both teams observed a 42-second moment of silence in honor of Robinson and those affected by racism. And like in past years, everybody wore Robinson’s No. 42, though there was no additional demonstration.

Renteria said he spoke with a couple of players before the game and that Tim Anderson relayed that the Sox were ready to play Friday.

On Twitter, Anderson explained what the annual Robinson remembrance means to him, calling it a day of reflection.

“Jackie encourages me to speak out, be who I am and play the game in a way that gives me passion and excitement,’’ Anderson wrote. ‘‘He taught me that there is beauty in being the underdog. I will honor and respect #42, today and every day.”