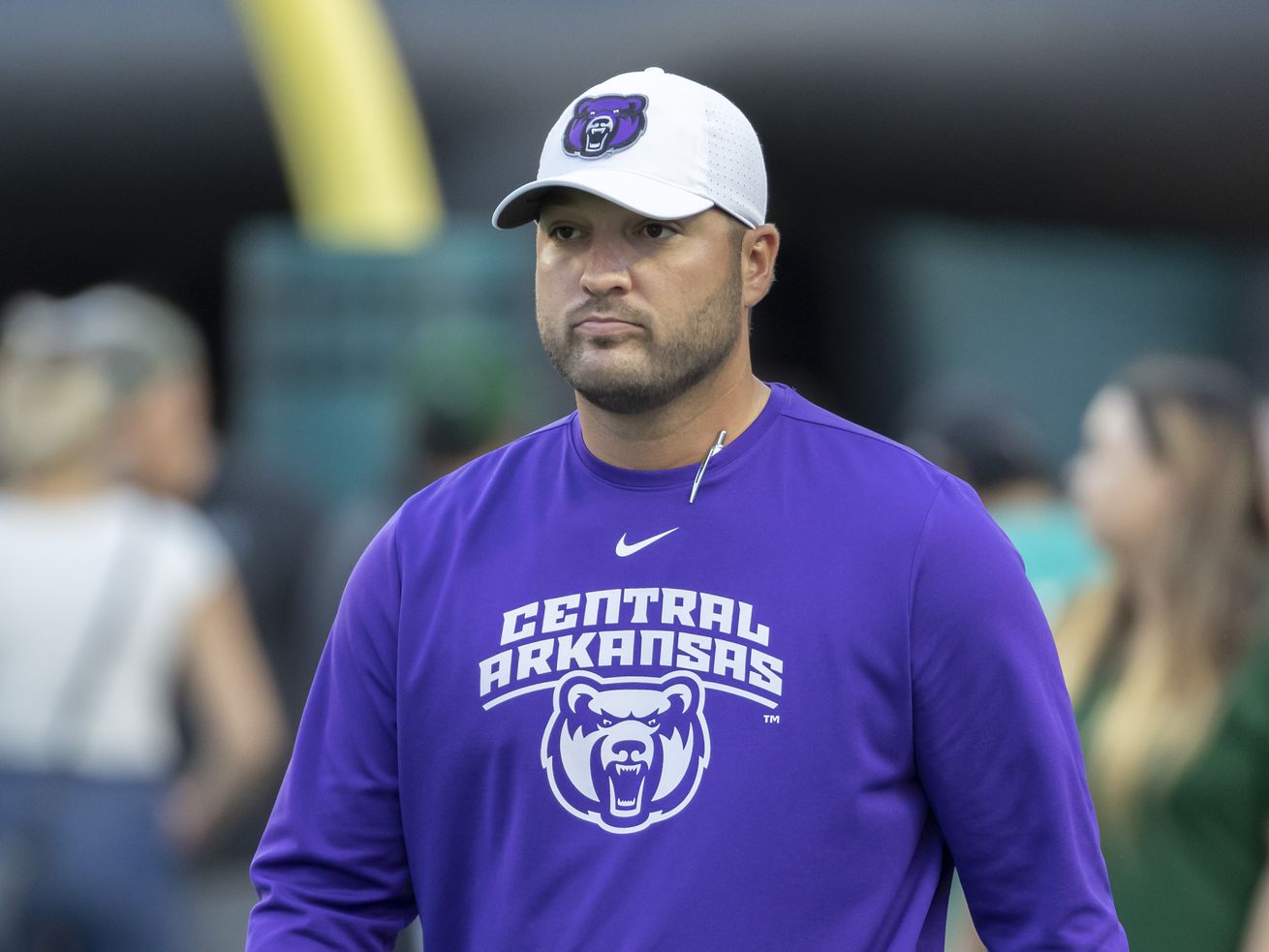 In this Sept. 21, 2019, photo, Central Arkansas head coach Nathan Brown walks on to the field before a game. When Central Arkansas and Austin Peay signed up to play in the first game of the college football season, little did they know how notable it would become. The FCS schools will kick off the shortened season Saturday, Aug. 29, 2020, in the Guardian Classic before a limited number of fans amid the COVID-19 pandemic. Brown says “we are the show in Week Zero and the game to really kick off football, not just college football but also professional football.” | Eugene Tanner/AP

The FCS schools will kick off the season, which is shortened by the coronavirus, on Saturday before a limited number of fans.

There will be college football on Saturday night.

More than five months after the coronavirus pandemic shut down all sports, and even as several major conferences have opted against competing this season while others attempt to manage outbreaks of positive cases, the 2020 college football season will begin roughly as scheduled with a game between two teams from the Championship Subdivision.

Central Arkansas and Austin Peay (9 p.m. ET, ESPN) were originally scheduled to complete a home-and-home series in Conway, Arkansas, before the pandemic led the two teams to shift the meeting to the Cramton Bowl in Montgomery, Alabama.

Not household names, the schools are among the better programs in FCS. Both teams reached last season’s playoffs, with Central Arkansas advancing to the second round and Austin Peay reaching the quarterfinals in winning a school-record 11 games under coach Mark Hudspeth, who abruptly resigned in July, citing the need to spend more time with his family. He was replaced on an interim basis by associate head coach Marquase Lovings.

As the only game of the opening weekend — known as Week Zero — and broadcast in prime time on ESPN, the matchup is expected to draw an audience starving for football content.

“This is different,” said Central Arkansas athletics director Brad Teague. ”And certainly because we’re the only game on Saturday and the first game of the college football season, the first NCAA contest since COVID shut it down in the spring, there is a lot more excitement.”

The chance to play on ESPN “is thrilling for these guys,” Teague said. “They’re very motivated and very excited. For our brand and for our national recognition and publicity, we’re very excited about that. We know it’s going to be very positive for us.”

The season opener provides a glimpse into how teams will handle the logistics of scheduling, planning and playing games while managing the health and safety concerns still posed by COVID-19.

Programs in the Bowl Subdivision have also been forced to reschedule individual games and even create entirely new schedules as conferences and specific teams drop out of competition. The Power Five leagues that have remained on track to begin the season in September have added conference games to the regular-season schedule.

Both teams will drive to the game on Friday and stay in a hotel overnight. Austin Peay will travel in four buses, one more than usual, with each bus at half capacity and with one person stationed per row. Every person in the Central Arkansas caravan will wear an N95 mask while on the bus, Teague said.

Central Arkansas’ testing protocols began with giving every student-athlete a gateway test — an initial test for the coronavirus — when they returned to campus. The athletics department has been testing athletes once a week since early August. There have been 300 tests administered across the past two weeks and just one positive result, Teague said, with the latest round of tests given on Wednesday.

In addition, Central Arkansas is requiring the bus drivers tasked with transporting the team to take a test for COVID-19 and have a negative result.

Austin Peay had an outbreak of 11 positive cases in June, leading the university to shut down all athletics for three weeks to recover and reevaluate existing protocols and procedures.

Several programs that discussed the logistics behind traveling to games with USA TODAY Sports said that roster sizes won’t change but the total size of the normal travel party will decline by removing cheerleaders, bands and superfluous staff members.

The smaller groups from Central Arkansas and Austin Peay will stick to the same distancing protocols used on campus or inside football facilities, limiting the amount of interaction players, coaches and staff members will have outside of hotel rooms.

“It’ll be a little different because under normal circumstances parents and friends could linger in the hotel lobby and hang out with players on the team,” said Austin Peay athletics director Gerald Harrison. “But that’s not happening now.”

The Cramton Bowl will limit attendance to a quarter of its 25,000-seat capacity, mirroring similar benchmarks used in the Power Five. Every SEC school that has announced attendance plans will allow capacity around 25% while adding measures requiring face coverings and prohibiting tailgating while shifting solely to mobile ticketing.

Both Central Arkansas and Austin Peay were allotted 400 tickets for athletes’ families and guests, Harrison said, while the remainder of tickets were sold online.

Unsurprisingly, the game is a sellout.

“We also understand the scrutiny that’s going to come with us playing while many others are not and being the first game when many have pushed back to September. We understand that,” Teague said. ”We’re ready to face those questions and talk about our safety protocols that have been in place really since June.”