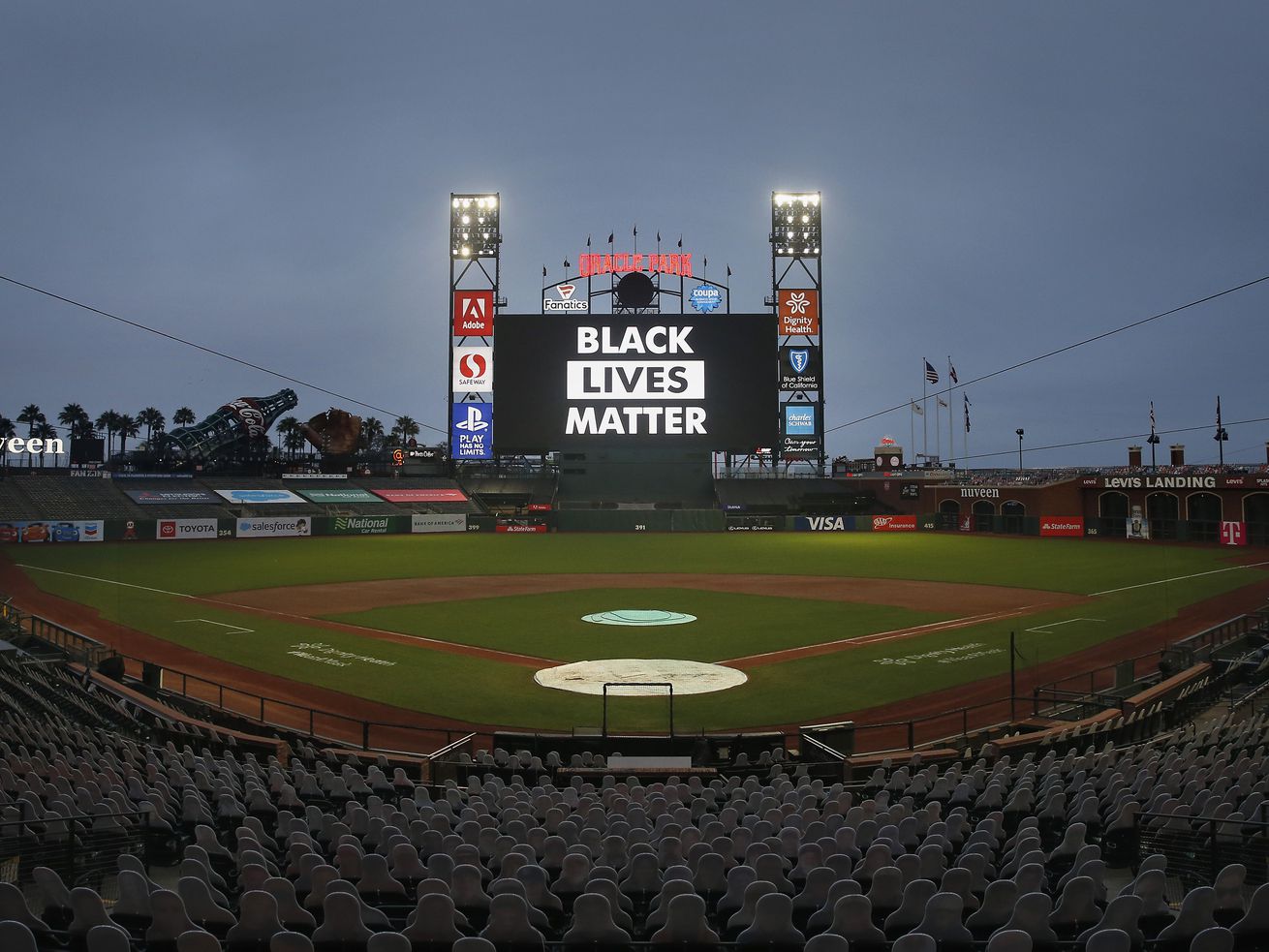 The words “Black Lives Matter” are displayed on the digital screen after the postponement of the game between the San Francisco Giants and the Los Angeles Dodgers at Oracle Park in San Francisco on Thursday. | Lachlan Cunningham/Getty Images

“We’re a different sport than the NBA,’’ says Brewers manager Craig Counsell, aware that the MLB’s Black population is only 7.8%. “The NBA led here. But our players went first in MLB, and I’m still very proud of them for that.”

The Milwaukee Brewers slowly walked to the right field corridor of Miller Park at 4:15 p.m. Wednesday, and every step they took they sensed they were marching their way to history.

They sat down and talked for 45 minutes, with seven or eight players speaking, reaching a decision that would change baseball.

They decided they were not going to play against the Cincinnati Reds, instead choosing to protest the police shooting of a Black man in nearby Kenosha, Wisconsin, refusing to permit this moment in time to be blurred by entertainment.

Just like that, history was made, with the first baseball game ever postponed because of political protest, and within minutes, the news swept throughout America.

The Seattle Mariners, with a major-league leading 10 Black members, also voted not to play, postponing their game against the San Diego Padres. Jason Heyward of the Cubs, Dexter Fowler and Jack Flaherty of the St. Louis Cardinals, and Matt Kemp of the Colorado Rockies joined the protest, and declined to play.

Los Angeles Dodgers star Mookie Betts told his teammates he couldn’t play either and Dave Roberts wasn’t going to manage, so, the entire team voted to join them, postponing their game against the San Francisco Giants.

Baseball was finally speaking out.

“It’s going to take all of us to make change,’’ Betts said. “Black people have been fighting this fight for centuries. We haven’t gotten anywhere. So, I think just having the white players, people in general to help push it, I think change can be made.

“But it will take all of us, not just one group of people.’’

It was the NBA and the Milwaukee Bucks who led the way, with the Bucks refusing to play Game 5 of their playoff series against the Orlando Magic, triggering the postponement of all three NBA playoff games set for Wednesday.

But let history show it was the Brewers who took the first step for baseball.

It was an easy decision, Brewers veteran Ryan Braun says, but a difficult 30-minute conversation, with the players leaving the meeting know there could be severe consequences playing in front of a conservative fanbase in an ultra-conservative sport.

“I mean, part of me is a little scared,’’ said Brent Suter, Brewers players representative. “You know, you refuse to play a game, the fallout is immense. … For me, there’s some anxieties and scariness.

Sure, the Brewers will be the first ones to tell you their protest wasn’t going to happen without the Bucks and the NBA leading the way. If the Bucks hadn’t boycotted, the Brewers would have played. Yet, it would have been easy for the Brewers to ignore the boycott, and just play a game of baseball.

When Colin Kaepernick took a knee four years ago protesting police brutality while with the San Francisco 49ers, the only baseball player to join him was Oakland A’s catcher Bruce Maxwell a year later, and no else until this year. Baseball players, knowing they’re playing a historically white man’s game, have always been fearful speaking out.

Well, times have changed, and while no one will confuse the Brewers with the Brooklyn Dodgers breaking the color barrier, their role in history should never be forgotten.

“We’re a different sport than the NBA,’’ says Brewers manager Craig Counsell, quite aware that the MLB’s Black population is only 7.8%. “We’re a very different sport. The Bucks led here. And the NBA led here. But our players went first in MLB, and I’m still very proud of them for that.’’

It takes courage to take a stand in this divided world of ours, where everything is suddenly black and white, right and wrong, and no matter where you stand, enemies await.

The game is different, and so is the world, but for the first time perhaps since before these players were even born, there’s a whole lot more to playing baseball than simply stepping between the white lines.

“They’re doing brave things, and I think they’re understanding their roles and embracing them.’’

You can say all of the politically correct things, wear the shirts with the virtuous slogans, but on a day like Wednesday, when all that mattered were actions, the Brewers and baseball stood tall.

“There comes a time where you have to live it.’’

Baseball finally lived it, refusing to be silenced, with players speaking out on social media, with Betts telling his teammates he couldn’t possibly play, and Roberts saying he couldn’t manage, and Giants manager Gabe Kapler talking about police brutality and systemic racism, and Kemp writing a poignant Instagram post about living in a “world where we become hashtags before we even reach our potential.’’

Tonight I stand with my fellow professional athletes in protest of the injustices my people continue to suffer. I could not play this game I love so much tonight knowing the hurt and anguish my people continue to feel. In a world where we are the ones who need to remain calm while a trained professional points a gun in our face; a world where the people in uniforms who took an oath to protect us are the same ones killing us; a world where we become hashtags before we even reach our potential; we must stand together, speak out, protest, and be the change we demand, require, and need so bad. To the families who have experienced these tragedies first hand my heart breaks for you, my prayers are with you and I use my platform to speak on your behalf. I will be protesting tonight’s game in honor of all of my fallen brothers and sisters at the hands of police brutality. #BLM #JacobBlake #BreonnaTaylor #GeorgeFloyd #Saytheirnames

“It’s not a political issue,’’ Roberts said. “I understand there’s an election coming up. But this is a human-being issue. We all need to be treated the same. And a Black man being shot seven times in the back, that just can’t happen.’’

There’s not a single ballplayer who believes their protests will provoke overnight change, but if nothing else, instead of providing entertainment for an evening, they created an opening for reflection and education.

“This is a big thing. This is real. It doesn’t go back to normal.”

Maybe this will be the day that baseball played a pivotal role, just like in 1947, that helped change the world.

“Hopefully this day will be remembered,” Betts said, “because it was the first step for change. I know I’ll always remember this day.”