Neighborhoods near Chicago’s city limits on the South, Southeast, Southwest, and West sides have a well known longstanding transportation access problem, creating disparity in commute times to available jobs. Transit inequality severs a part of the city’s talent pool and slows regional job growth, and although the loss of economic opportunity is hard to measure with any accuracy its magnitude compounds over time.

Chicago’s transit inequality is not an intractable problem. If we will only look, countries throughout the world demonstrate a tried and true solution for transporting dispersed urban populations to job centers. Residents in Africa, Eastern Europe, Latin America, and Asia hire private share taxi minibuses for transportation throughout areas of dispersed density. They’re known as jeepneys in the Philippines, tap taps in Haiti, moniyot sherut in Irael, public light buses in Hong Kong, louage in Tunisia, danfo in Nigeria, fula fula in Kinshasa, angkutan kota in Indonesia, taxis in Iran, Songthaews in Thailand, shuttle vans in New Zealand, dolmuş in Turkey, taxis collectifs in Quebec, Colectivos in Argentina, peseros in Mexico, ruleteros in Guatemala, or Jitneys in Chicago. In former Soviet countries they are called “marshrutkas,” and even as so many other public services have fallen apart they continue to work remarkably well. 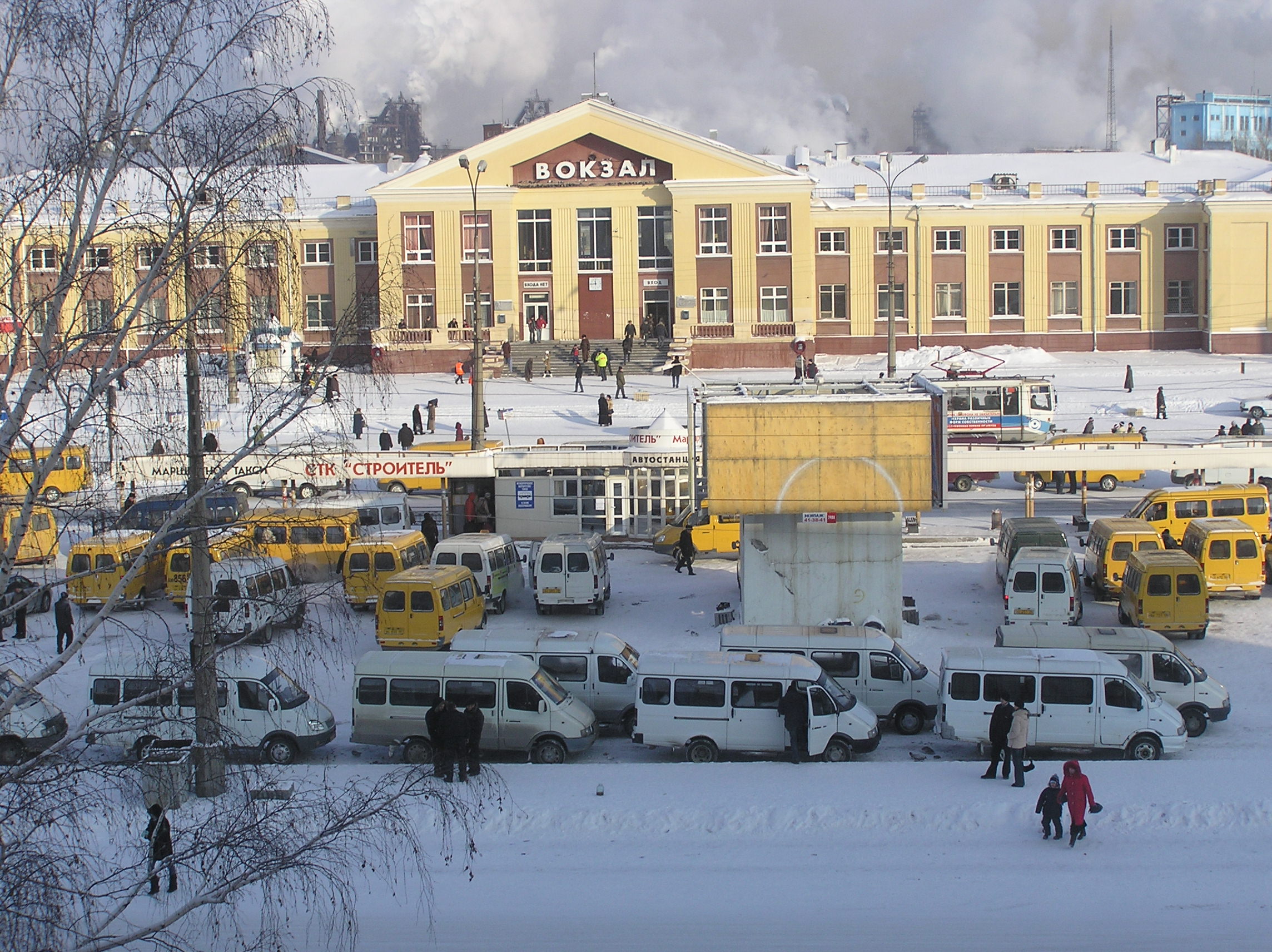 Marshrutkas at a Russian train station, waiting to take passengers in any number of directions.

Where they are allowed, “Jitneys” or “Dollar Vans” are successful in the US, too. But in the early 20th Century streetcar companies successfully lobbied for bans in most cities. For a brief primer, here’s a quick overview. Here’s how they successfully operate in Queens. A share taxi solution could be implemented in Chicago for little cost, and over a timeline barely longer than it takes to write an ordinance.

The right tool for the job

Chicago’s challenge is that the South and West sides are much larger, much less dense, and much less wealthy than the North side, creating transit demand that isn’t concentrated along logical corridors but rather blanketed throughout vast areas. This is exactly the same problem that share taxis address in so many of the world’s communities. They are self-directed rather than precisely scheduled, meaning they dynamically respond to changing demand patterns through the days, months, and years. They are smaller than full size buses and can more easily run full, meaning they seldom operate at a loss, even in areas without density. Their numerous number and smaller size allows them to more precisely match demand – like a screen with a higher resolution and smaller pixels – avoiding resource waste. Finally, they would represent a low barrier to entry entrepreneurial opportunity for Chicagoans all over the city.

Jitneys are not new to Chicago, but they’ve never been fully unleashed. The Tribune ran a story about the 1950s “Jitney war” in Bronzeville, in which Jitneys were providing critical transportation services that racist bus drivers refused to provide. In 1994 Crain’s reported that the city was considering allowing more Jitneys to serve South side neighborhoods, but this effort was shut down by CTA and taxicab lobbies the same way previous ones had been.

Dollar Vans lined up in Brooklyn.

The current problem is that Chicago bars jitneys (Chp 9-114-350(a)) and ride share vehicles (Chp 9-115-100(b)(1)) in excess of 9 seats from operating in the city. It bars jitneys from particular profitable areas such as downtown and the airports, and leaves enormous amounts of discretion in the hands of the Business Affairs and Consumer Protection commissioner to ban additional routes, fix prices as low as desired, and administratively add further regulations, creating significant legal uncertainty. Furthermore, the city’s ridesharing ordinance – molded extensively by the taxicab lobby – does not inspire confidence that further regulations will maintain a low barrier to entry for nascent transportation entrepreneurs. 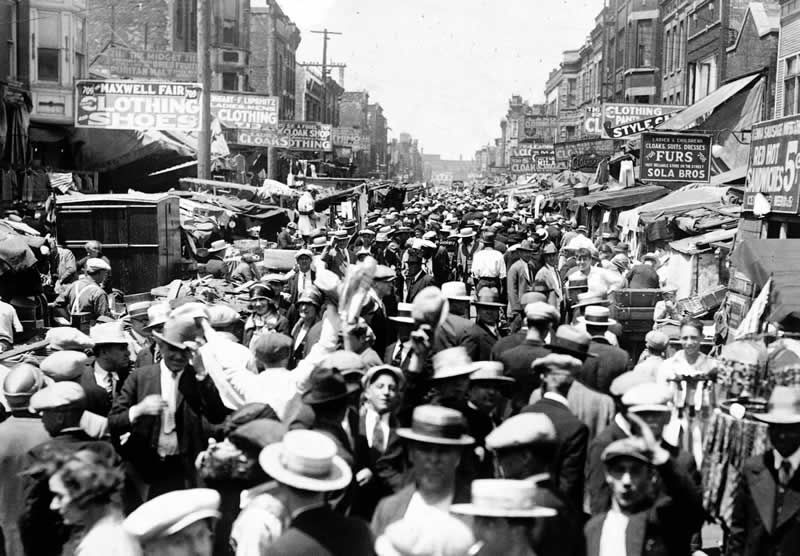 Once located in a dense neighborhood, Maxwell Street Market lowered barriers to entry for entrepreneurs and customers. Chicago Blues resulted from the constant collisions of creativity.

Every entrepreneur faces a number of barriers to entry when considering a business, including financial requirements, needed knowledge, legal and regulatory restrictions, supply and operational logistics challenges, accounting and records keeping set up costs, the need to secure space from which to operate, and so on. Lowering these barriers to entry is the key to increasing economic mobility. A resident with an import and retail idea can try and sell at temporary, low-rent Maxwell Street Market and see how people respond. A budding restaurateur can start in a relatively inexpensive, mobile food truck.

Prioritizing lower barriers to entry as a key part of equitable economic development efforts would have significant policy implications. Maxwell Street should probably be moved to Woodlawn, where it would do more good. Better yet, there should be additional outdoor street markets throughout Chicago’s neighborhoods, and in many neighborhoods they shouldn’t be taxed. The city should start pushing south side developers to build European-style flea market halls with permanent micro-retail booths. Manufacturing makerspaces and incubators should be a critical city-sponsored infrastructure component in all Chicago neighborhoods.

Consider the barriers to entry for a Chicagoan who loses their job just after buying a car, and decides to use their vehicle as a rideshare. This Chicagoan shouldn’t have to be fingerprinted, or get two different kinds of licenses, or take online classes, or face fines because they can’t afford full ADA upgrades to their automobile, or be barred from operating because last year they moved from Hegewisch to Whiting, Indiana. The origins of these rules are plain; the ridesharing ordinance actually says this newly self-employed rideshare driver can’t pick up people giving hailing gestures, and has to submit to regular city inspections verifying there’s no visible rust on their vehicle. 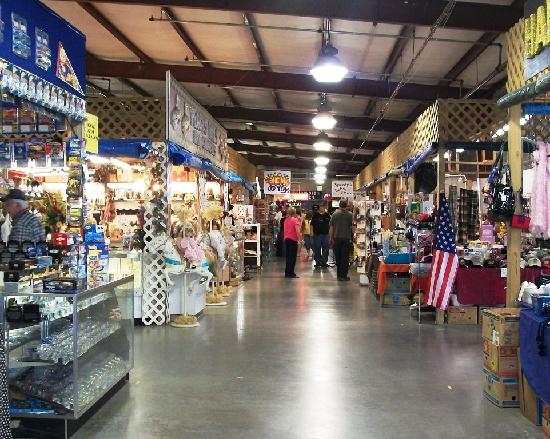 This Tennessee flea market includes permanent booths, lowering barriers to entry and dropping the cost of starting a business to thousands of dollars rather than tens or hundreds of thousands.

When the 14th Amendment was first passed, the right to earn a decent living was considered a key part of the “privileges or immunities” of citizenship. A free person owns his/her own body, and can engage in commerce. The City of Chicago should debate proposed regulations in these terms: “Will this bar the gates to poor Chicagoans, and prevent them from earning a living? Does this raise the barriers to entry above the level many can reach?“

As reported by WBEZ, there are signs that existing ridesharing regulation is hurting minority communities the most.

Chicago’s neighborhoods desperately need a city council that prioritizes lowering the barriers to entry and the costs of a job. The ability to get to work is a linchpin piece of this, and in pursuing real solutions the underperforming system may need to be shaken up.

Just like people, systems reveal their priorities through their actions. Subordinating the clear significant need of the populace to political lobbies is in my view clear evidence of the same systemic racism and classism that also infects the criminal justice system. The system does not produce incentives that get results for those without clout, and nobody seems interested in changing the incentives to attain better results. Avoiding reform also demonstrates a lack of trust in the people. An alderman should believe – should know in his/her heart – that if he/she stands up to special interests in defense of constituents’ rights, they will have his/her back.

Reform would of course require navigating the certain opposition of the transportation unions and taxicab lobby, which would fear the competition. A politician may well consider jitneys to be a path of excessive political resistance.

Consider the relevant question, however:

Is the city or state likely to be able and willing to fund a fully public system of a jitney-equivalent service level?

Since with the right policy there would be an explosion of affordable transportation options throughout all areas of the city, equivalent service means the addition of thousands or perhaps tens of thousands of buses throughout Chicago. In the face of the many other demands upon limited public funds, we should be honest with ourselves about the public’s ability to provide an equivalent service level. In urban Ukraine marshrutkas are in many areas more numerous than cars, and they run with passenger loads 2 or 3 times higher than the Chicago’s arbitrary 9-person cap. There’s no public solution that can match this level of service.

In enacting real reform, the council could make certain that all areas of the city are covered. In applying for a license (which should be unlimited in number), the driver would have to share their location when driving. In exchange for driving on a profitable well served route, a driver would need to also drive an underserved route. The city would make a trade: Belmont in exchange for Marquette, or Damen in rush hour in exchange for Damen in the wee hours. The share taxi data correlated with population statistics should create a robust data set and result in a calculation of each route’s and time’s relative public value. Note that route trading isn’t a new idea, and has been successfully implemented in Eastern Europe.

Effective reform is urgent; when a city consistently fails to help its residents attain a better life, it fails at the chief economic purpose of a city. And people leave. Chicago has gained and then lost a million people since 1920, and its remaining population is both more concentrated in or near downtown and further dispersed throughout the urban periphery. The economic geography of the city is much different than when the transit system was built. Even with the red line’s Southern extension, many wards will remain underserved by city buses.

Faced with the reality of scarce public resources, outside-the-box approaches like share taxis are the most realistic, practical way of providing equitable transit throughout all of Chicago’s communities. A system of share taxi route trading would make Chicago a national model in public transportation, much like Minneapolis has become in some circles for their zoning reform measures. The city is geographically vast, but “Jitneys” throughout the world have a track record of effectively addressing widely dispersed transportation demand. They would work here, too.

In observing an effective solution deployed around the world, transit inequality should be unacceptable in 2020 Chicago; every Chicagoan could and should have reasonable access to any available good job in Chicago, irrespective of its particular location. Jitneys are a proven solution, within easy reach if we have the will to do what is right and insist on equal opportunities for all.